Jaylen Brown Sends Warning to LeBron James Ahead of Game 1 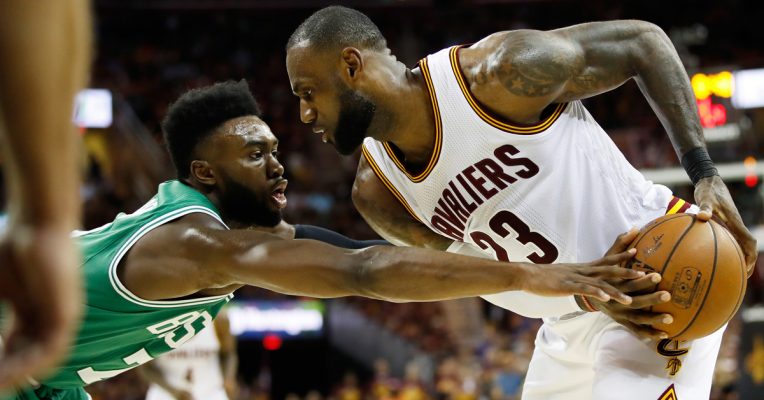 Despite the fact that games have yet to take place the Eastern Conference Finals between the Cleveland Cavaliers and Boston Celtics, the looming presence of Cavaliers veteran forward LeBron James is on the minds of Celtics players. The latest evidence of this is a statement from second-year swingman Jaylen Brown about his proposed plans for the series.

“He’d better be alert, because if he’s not, I’m going to get it going,” Brown said.

However, Adam Himmelsbach of the Boston Globe pointed out one key statistic from this season’s three regular season games between the two teams:

“James guarded Brown for 89 possessions — nearly twice as many as Brown guarded him — and he had great success, holding Brown to 2 for 21 shooting.”

Entering this series, Brown has exactly 28 games of playoff experience in his two NBA seasons. In stark contrast, James has played in 228 postseason contests over 15 seasons and holds all-time records in multiple statistical categories. That extensive experience is an indication that James knows how to effectively deal with defensive strategies by opposing teams.

Against the Celtics specifically, James has played in 34 playoff games and has averaged 28.8 points, 8.4 rebounds and 5.9 assists. Most recently, he and the Cavaliers sent Brown and the Celtics home last season in the conference finals, winning the series in five games.

Brown’s comments come in the wake of his teammate Marcus Morris‘ remarks about James, with Morris’ postseason resume of 16 games even lighter than Brown’s. Once Game 1 gets underway on Sunday afternoon, all of the conversational buildup will fade away, with actual on-court results actually determining which team heads into the NBA Finals against a Western Conference opponent.