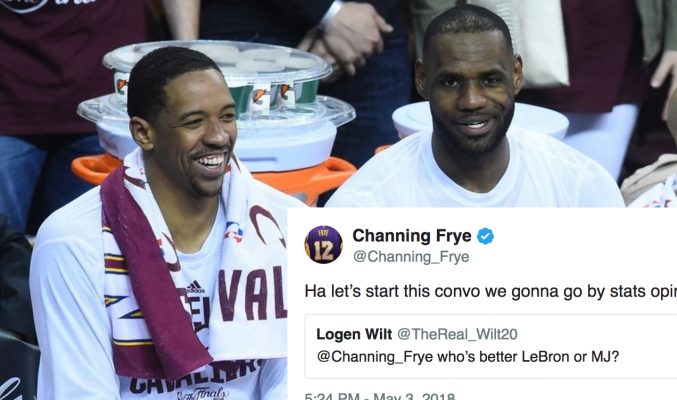 LeBron James has already put in a number of astonishing performances in the Cleveland Cavaliers‘ playoff games this seasion, but his performance in Game 2 against the Toronto Raptors was special even for him.

In fact, James put on such a show that his former teammate Channing Frye took to Twitter to start a conversation with some of his fans about both the Cavs and James.

What am I gonna say the Cavs are literally almost impossible when they can score in the paint and can score 100 by the 3rd quarter https://t.co/49F8u2jnqR

By the waning minutes of the third quarter, the victory was all but guaranteed for the Cavs. It was then that James began taking fadeaway shot after fadeaway shot. He hit seven fadeaways in the second half alone, and that’s when Frye really got excited.

Ok, y’all gonna get tired of these tweets but #BBQChicken time!!!! The shots he’s Making is ridiculous

Eventually, Frye felt compelled to engage fans on whether or not the four-time MVP is the best player in NBA history. While some made cases for other players, it seems through his responses that Frye feels quite confident that James sits atop the NBA throne.

Explain in your eyes how? https://t.co/vhuGoQeVcb

There we go let’s add some amazing players that should be added as the greatest of all time. Let’s not forget wilt or love or even Tim Duncan https://t.co/amcNWJFNpW

Regardless of where you put James on your list of all-time players, there is no denying that very few players have ever played better basketball than the three-time NBA champ is playing right now.

While even a trip to the NBA Finals this season had seemed like a long shot just a few days ago, it is now beginning to seem that James will truly succeed in leading his team to the Finals for a fourth straight season. It would be wise to check Frye’s Twitter from time to time along the way.