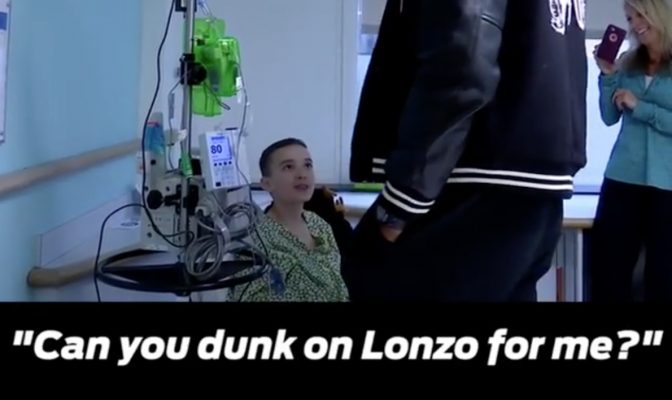 LeBron James took a break from dominating the NBA on Wednesday when he visited the Cleveland Clinic Children’s to meet with a young fan and bring him some holiday cheer.

The young boy, Andrew, gave James a high five before asking for a special gift from the four-time MVP.

“Can you dunk on Lonzo [Ball] for me?” Andrew asked.

His question drew laughs from those in the room, and James promised to do his best to fulfill his holiday wish.

“I got you,” James laughed. “I got you. He might not be in my way. Once he sees I’m about to take off he might move out the way.”

The Cleveland Cavaliers are looking for their third win in a row on Thursday night as Ball and the Los Angeles Lakers come to Quicken Loans Arena in Ball’s first ever matchup against James. Hopefully Andrew gets his wish and not only sees King James lay the hammer down on Ball, but also sees another Cavaliers win.