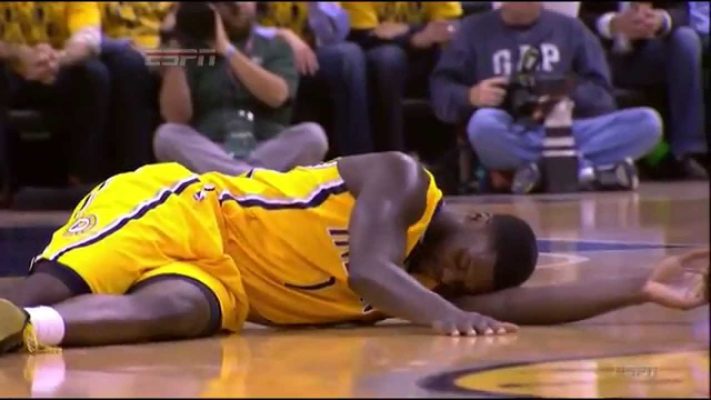 The presence of the Indiana Pacers’ Lance Stephenson on the court tends to elicit plenty of reactions from members of the Cleveland Cavaliers, primarily because of his ability to irritate them with his style of play. One of those plays came in the second quarter of Sunday night’s Game 4 clash between the two teams and got the attention of the Cavaliers’ J.R. Smith, who used his Instagram account after the game to offer his succinct opinion on Stephenson’s flopping in the final minute before halftime.

The play in question came during Victor Oladipo‘s 3-pointer that cut the Cavaliers’ lead to 10 points:

Oh this game aint over yet let’s go pic.twitter.com/Pv3vtUGFne

In the fourth quarter, Stephenson also provoked LeBron James into receiving a technical foul and nearly sparked a fight in the final 10 seconds by tying up Jeff Green and slamming him down in the process. In the latter case, a few minutes of discussion by officials and a check of the game tape resulted in Stephenson being called for a foul instead. Green then split his two free throws to clinch the 104-100 victory.

Smith ended his night playing 35 minutes and scoring 12 points while also hauling down five rebounds. In addition, he was one of the key players who helped effectively keep the dangerous Oladipo in check, limiting him to 17 points, thanks to a weak 5-for-20 shooting effort from the field. However, Smith’s most memorable moment of the evening came at the end of the first quarter, when he connected on an estimated 61-foot shot at the buzzer to give the Cavaliers a 30-25 lead after one period.