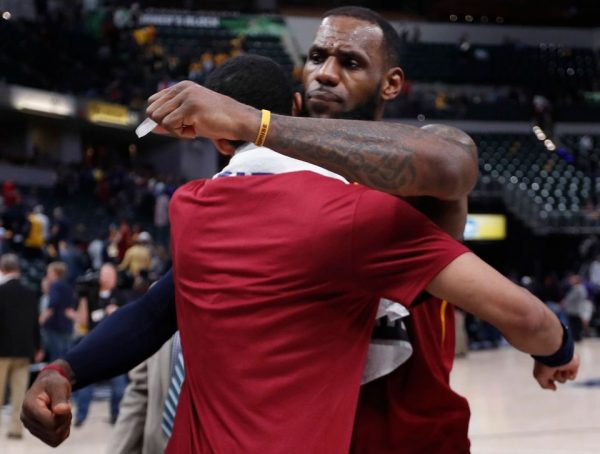 (Indianapolis, IN) — The combination of LeBron James and Kyle Korver combined for all but one of the final 15 points to help the Cleveland Cavaliers hold off the Indiana Pacers by a score of 104-100 at Bankers Life Fieldhouse in Game 4 of their first-round playoff series on Sunday night. The victory evens the series at two games apiece and turns the matchup into a best-of-three over the next week.

Trailing 92-89 with just over six minutes to play, James scored to chop the margin to a single point. After the Pacers split a pair of free throws, James sandwiched another basket between a pair of clutch Korver 3-pointers to give the Cavs the lead for good. Korver then looked to have put the game away by converting two free throws with 14 seconds left to make it 103-97.

However, Victor Oladipo hit from long-range with 11.9 seconds left and Jeff Green appeared to get tied up with the Pacers’ Lance Stephenson, which sparked a huge controversy. Stephenson slammed Green to the ground in grabbing the ball, with Green responding in anger that could have conceivably resulted in him being assessed a technical foul. However, after a few minutes, Stephenson was instead given a foul and Green split his two free throw attempts to clinch the win.

“I thought it was huge,” Cavs head coach Tyronn Lue said about Korver’s two 3-pointers. “Kyle shot the ball really well and then, down the stretch, ran a couple plays and came up and made some big shots for us.”

“His four 3s were huge and we needed every last one of them,” James said.

James picked up another double-double with his 32 points and 13 rebounds, while also handing out seven assists, and Korver ended his night with 18 points after getting off to a cold start. J.R. Smith and Jordan Clarkson each added 12 points apiece, with Kevin Love grabbing 11 rebounds despite a rough shooting night from the field that saw him hit just 2-of-10 in that department after getting two quick fouls in the first 90 seconds. Overall, the Cavs’ bench scored 32 points, helping make up in part for the absence of George Hill, who sat out the game with back spasms.

“I told him to be aggressive,” Lue said of Clarkson. “Playing in drive, playing early in transition and looking to score the basketball.”

The first quarter saw the Cavaliers lead by as many as eight points at 21-13 with 3:16 left in the quarter, an advantage built in part by holding the Pacers to just 30 percent shooting on their first 20 shots from the field. Indiana then heated up enough to slice away at that deficit and appeared to be heading into the second quarter trailing 27-25. However, Smith connected at the buzzer on a shot from an estimated 61 feet to make it 30-25 in the Cavs’ favor.

“Those shots, if you can get them off, I like taking them,” Smith said.

That miracle shot seemed to spark the Cavaliers in the second quarter as they put together a 19-8 run to take a 49-33 lead midway through the period. The Pacers again chipped away at the deficit, getting it down to nine, only to see the Cavs push it back up to 15 at 58-43 with 1:33 left before halftime. By the time intermission arrived, the Cavs held a 60-50 lead, finishing the quarter with 55 percent shooting from the field and being led by Clarkson’s nine points off the bench.

Some bad memories from Friday night’s second half debacle then resurfaced in the early minutes of the third quarter when the Pacers began with a 10-2 run to make it a 62-60 game. Cleveland was able to temporarily stem the tide, but Indiana again got within two and had an opportunity to tie the game. That effort failed, but in the closing minutes of the period, the Cavs went cold by missing their last six shots from the field, part of 29 percent shooting for the quarter in that area. They took a slim 80-78 lead into those final 12 minutes, with 16 of the Pacers 28 points in the quarter coming in the paint.

“We had some breakdowns on defense early in the quarter and we can’t have that,” James said about the third period. “We just have to clean that up.”

What now becomes a pivotal Game 5 resumes on Wednesday night back at Quicken Loans Arena with the contest set to tip off just after 7 p.m. ET.

“We’ve got to use the home court to our advantage, like we did in Game 2,” Love said.