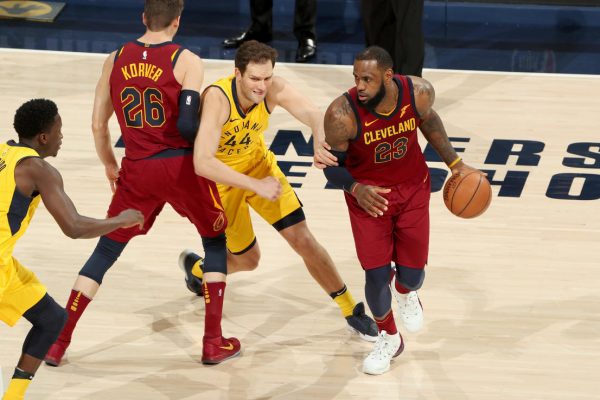 (Indianapolis, IN) — The Cleveland Cavaliers watched a 17-point halftime lead completely disappear and then came up just short in a furious late rally to fall to the Indiana Pacers, 92-90, in Game 3 of their first-round series at Bankers Life Fieldhouse on Friday night. The loss now gives Indiana a 2-1 lead in the best-of-seven series.

Coming out of the halftime break, the Cavaliers spent most of the third quarter trying to put the ball in the basket, getting outscored 23-12 and watching their lead dwindle to just six points at 69-63. The chief culprit was their abysmal shooting from the field, hitting on just 5-of-19 (26 percent) in that area, though committing seven turnovers in the period was also damaging. That turnover total was one more than Cleveland had during the entire first half.

“I just thought their physicality hurt us,” Cavaliers head coach Tyronn Lue said after the game. “We just didn’t come out in the third quarter ready to play.”

In the fourth quarter, the Cavs held a 75-70 advantage before watching the Pacers go on a 14-2 run to take an 84-77 lead. LeBron James then connected for back-to-back 3-pointers to cut the Cavaliers’ deficit to a single point, then split two free throws to tie the game with 3:25 left. Indiana came back with seven straight points, with Cleveland managing to slice the margin down to a point with 7.6 seconds to go after Kevin Love hit from long-range. After Indiana split a pair of free throws with five seconds remaining, J.R. Smith put up a desperation shot at the buzzer that missed.

Over the final two quarters, the Cavs shot just 34 percent from the field and also committed 10 turnovers, numbers that ultimately cost them the game. That turnover total was just one less than their assist total of 17 on the night.

“We missed a lot of shots,” Lue said of second-half slide. “If we just make one of those 3’s during their run, we would have stopped their momentum.”

James led Cleveland in scoring with 28 points and collected a double by adding 12 rebounds, while also handing out eight assists. Love scored 19 points and grabbed six boards, while George Hill was the only other Cavaliers player to score in double figures, tallying 13 in the losing effort.

“Our ball movement,” Love said in pinpointing one of the main problems for the Cavs in the second half. “We didn’t get the ball to the other side of the court. Plus, we weren’t aggressive enough.”

The Cavaliers got off to a good start by scoring the first five points of the game, but the Pacers quickly answered with five unanswered points. After the two teams traded both baskets and the lead, the Cavs delivered a 15-2 run that gave them a 30-17 advantage with 1:45 left in the period and held a 31-20 lead when the quarter had ended. A number of factors contributed to Cleveland’s early success, including 61 percent shooting from the field, frequent trips to the foul line and forcing seven Indiana turnovers.

The Pacers weren’t able to get the margin below eight during the first four minutes of the the second period before again watching the Cavaliers take control and head into halftime holding a 57-40 lead. Over those final eight minutes, the Cavaliers used an 18-9 run that was fueled in part by Love’s eight points. The Cavs also continued to get second-chance opportunities by finishing the first half with seven offensive rebounds and hit for four 3-pointers during the quarter.

“I’m confident,” Lue said of the challenge facing the Cavaliers in Game 4. “If we play like we did in the first half, we’ll be okay. You can’t let a team like this come back. We have to be better than that.”

Game 4 will take place on Sunday night in the same venue, with the game getting underway just after 8:30 p.m. ET. Another loss by Cleveland will put them in the unenviable position of having to come back from a 3-1 deficit.

“It’s the postseason. I think every game is a must-win,” James said. “You wanna come in and play well and win, no matter what. No matter if you have home-court advantage or you’re starting out on the road. That’s the mindset you have to have.”