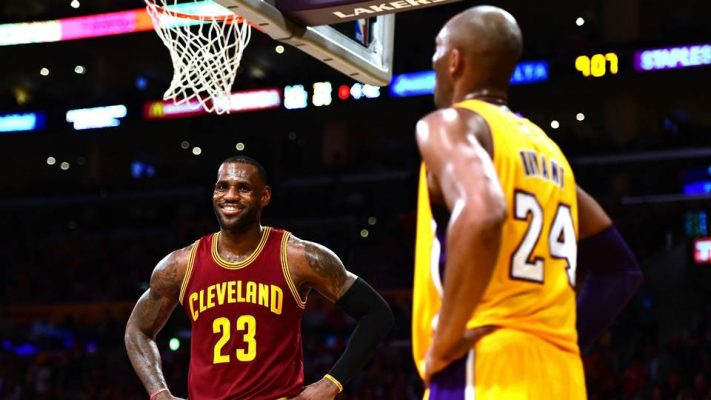 What team Cleveland Cavaliers forward LeBron James plays for during the 2018-19 season has been the source of energetic discussion for most of the past year. James is expected to become a free agent again in July, with the Los Angeles Lakers seen as a strong potential destination. That scenario is something that has led to the idea of former Laker legend Kobe Bryant making a recruiting pitch on behalf of his team for not only James, but Oklahoma City’s Paul George as well.

Bryant was asked in a phone conversation with USA Today writer Sam Amick about how he would sell James on playing in Los Angeles, a city where James already owns two mansions. The future Hall of Famer indicated that his confidence in the Lakers’ current front office would serve as a key factor in his sales pitch, the chief reason being that his former agent, Rob Pelinka, is serving as the team’s general manager:

“I bet on Rob my whole career, and it’s worked out pretty damn well for me, right? I’d make that bet on Rob Pelinka every day of the week and twice on Sunday.”

Despite that willingness to aid the Lakers, Bryant says that his post-basketball career will take precedence over any recruiting effort on his part:

“I’m not recruiting people. That’s not what I’m here for. That’s not what I do, man. I mean I’m friends with everybody, so if a player is thinking about coming here and he wants to call me and talk about it, I’m more than happy to talk about it and tell him what a wonderful place this is, which they already know.”

James would undoubtedly be looking to join a team that’s primed to be in position to win a title, something that doesn’t necessarily mesh with Bryant’s philosophy of patience when it comes to building a strong team:

“You look at the Lakers and the youth and the players that they have, and you’ve just got to be patient and develop these guys,” Bryant said. “I always say it’s about having a patient impatience, where you want to win championships now but you know that’s not going to happen now but you have the determination and the resolve to work and push and learn as if you’re going to be that immediately.”

Given the fact that James can make the most money by staying with the Cavaliers, there’s no certainty that he would leave the franchise as a free agent for the second time in his 15-year career. While his actual intentions won’t be known until July, many people see a connection with how deep the Cavs go in the postseason with that decision. Until that time, everything remains a guessing game.