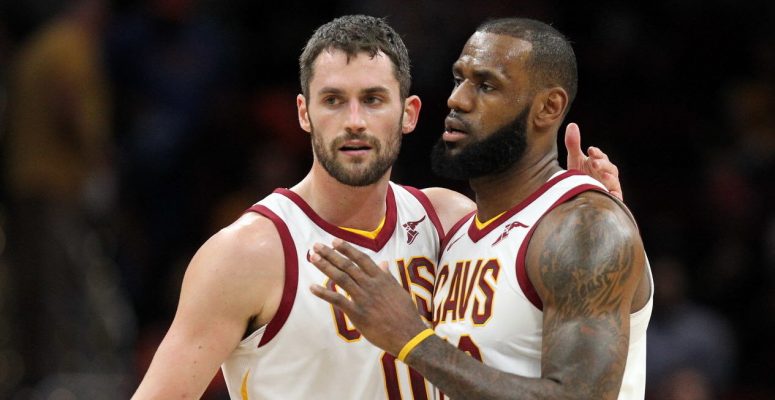 For many in the NBA world, it is already a forgone conclusion that Houston Rockets guard James Harden will be anointed this season’s MVP. If you ask Cleveland Cavaliers forward Kevin Love, however, LeBron James is just as, if not more, deserving of the award this season.

Love spoke about his teammate’s incredible achievements this season, saying that James’ accomplishments should not be overlooked.

Kevin Love thinks LeBron James "could easily be the MVP" this season. pic.twitter.com/5OZJ5kmOd8

“I mean I don’t know if the word unprecedented is the word to go with, but 15th season, could easily be the MVP,” Love said. ” I believe that you could either argue the numbers, you could argue it’s unprecedented what he’s doing in his 15th season. I would say, even if he doesn’t, if he weren’t to win it, it would have to be the best season anybody has ever had and not won the MVP.

“It was such as special year. We had so many injuries, he played all 82 games, and he was still able to, and not surprisingly, play at such a miraculously high level.”

Love certainly has a point when referring to his longtime teammate’s incredible season. While Harden averaged 30.4 points, 8.8 assists, and 5.4 rebounds per game this season, James averaged 27.5 points, 9.1 assists, and 8.6 rebounds.

From a numbers standpoint it appears that James had just as large of an impact on his team’s success as Harden did. His importance to the Cavs is made even more clear when you do consider all the injuries, roster changes, and off-court distractions that they had to deal with this season.

Perhaps the only reason James is not a clear shoe-in for the award is because he is not only competing against the other top-level players in the league this year, but also against himself. If James were to win this season, it would be the fifth time he would hoist the Maurice Podoloff Trophy in his career. While that fact shouldn’t make it harder for James to win, it has appeared in recent seasons that voters are less willing to give James the award.

While James has admitted that winning his fifth MVP would mean a lot to him, there is only one way to gauge true success in the NBA: by raising a Larry O’Brien Championship Trophy. The Cavs may seem like a long shot this year, but James could prove once and for all just how valuable he is by bringing yet another NBA championship to Cleveland.

cleveland cavaliersfeaturedJames Hardenkevin lovelebron jamesnews ticker
← Previous Story J.R. Smith Says He Hasn’t Heard Back From Kyrie Irving After Reaching Out
Next Story → Video: LeBron Scores on Lance Stephenson, Stares at Him All the Way Down Court