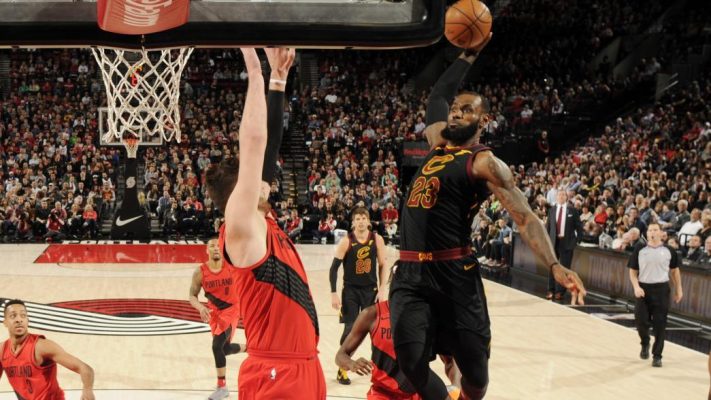 The career of Cleveland Cavaliers forward LeBron James has had countless highlights that show off the future Hall of Famer’s all-around game and incredible physical talent. The newest teammates of James were all familiar with his talents before they arrived in Cleveland, yet are still amazed with what he can do on the basketball court.

Jordan Zirm of Bleacher Report queried some of those teammates about the James memories they’ve collected since donning a Cavaliers jersey. Veteran point guard Jose Calderon notes that out-of-the-ordinary plays, even in practice situations, have now become the norm:

“There’s one of those [crazy] moments every other day,” Calderon said. “Sometimes he’ll throw a behind-the-back pass in practice and you’re like, ‘Ah, OK, I guess this is normal.’ I think sometimes we’re so used to [his play] we forget about it. That’s why we talk about other guys. He does too much, man. It’s amazing.”

Calderon also noted the built-in leadership qualities James already has with some of the younger newcomers, who’ve had to adjust from being simply fans to teammates:

“When some of these guys were in high school and college, he was already in the league,” Calderon said. “[LeBron’s] a guy that you looked at, you’d be watching those games, and now you’re in the same room and practicing with him. I guess sometimes you realize, ‘OK, I’m here!’ I get that feeling. I see a lot of guys, every time he talks, they’re like, ‘OK, he’s saying something, and it’s important and we better listen.'”

George Hill struggled to pinpoint any one play and simply marveled at James’ consistency when it comes to delivering excellent performances:

“S–t, one play?” Hill asks incredulously. “I can’t sum it up in one play. Every game I’ve been in so far being here, he still seems to amaze me. The level of play he’s playing at, the amount of miles he has on his body, and the performances he still puts up night in and night out is just remarkable.”

For Larry Nance Jr., that consistency helped make the March 5 game against Detroit stand out for an ironic reason. That’s because postgame attention was directed at him for his clutch play in the win, which Nance found confusing:

“It was a big game for me. But everybody is blowing up and making all this noise, like, ‘Oh my God, Larry won us this game. Larry, Larry, Larry,'” Nance said. “And I’m like, ‘Did you not see that [LeBron] had 31, seven and seven?’ Those type of numbers he puts up every night and is underappreciated for it. How you can put up 31, seven and seven and be unnoticed is absurd to me. That was my moment of, people just take this for granted. And it’s crazy.”

Rookie Cedi Osman was struck by a James comment after the opening game of the season, in which James lamented that he wasn’t at his peak:

While London Perrantes hasn’t seen much action this season, he did have a front row seat for the most memorable James moment of the 2017-18 regular season: the thundering dunk over Portland’s helpless center, Jusuf Nurkic, on March 15.

“It was unreal. Something that I’ve never seen before,” Perrantes said. “To be right in front of it, right there on the court, it was kind of crazy. You can’t hold [your emotions] in. You don’t know what’s going on.”

Nance had left that game with an injury, but still managed to get a glimpse of the awe-inspiring dunk in the team’s locker room:

“I was in the locker room [when it happened],” Nance said. “But I watched it live [on TV], and everybody was kind of quiet. Like, ‘What the hell?’ And then we had to rewind it, like, ‘Oh my God, he really dunked that ball.’ Just the way he turned the corner and picked up speed.

“We had to ask [LeBron], ‘Where do you put that in your [all-time] dunks?’ He said it’s probably top five. So then we spent the rest of the half debating what his top five was. The power he dunked it at, 15 years in, it’s unprecedented.”

That slam certainly got the attention of Hill:

“Yeah, that Nurkic dunk was something else,” Hill said with a laugh. “Something where the clock turned back. Something that makes you say, ‘I didn’t know he could still do that.’ That’s how special he is.”

With the Cavaliers headed to the playoffs, these newcomers will be getting a look at a fully engaged James who’s not only seeking to reach the NBA Finals for the eighth consecutive year but also looking to capture his fourth NBA title. Having already etched his iconic block in Game 7 of the 2016 NBA Finals into the memory banks of every basketball fan on the planet, James will seek to top that most memorable of moments for the Cavaliers.