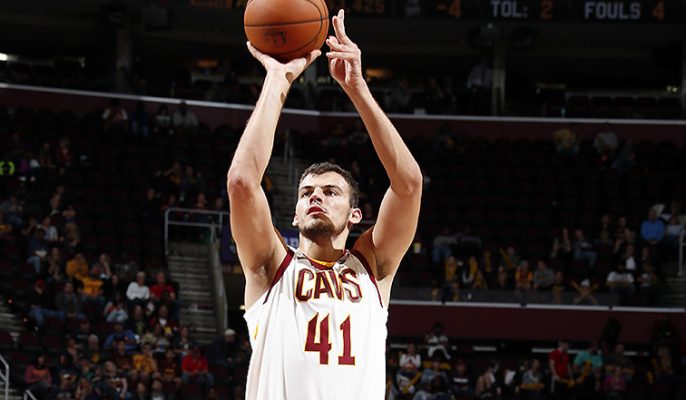 Ante Zizic may have been something of an afterthought in the trade that sent Kyrie Irving to the Boston Celtics last summer, but he is certainly not playing like one.

Following the Cleveland Cavaliers‘ victory over the Milwaukee Bucks on Monday night, interim head coach Larry Drew discussed Zizic’s recent developments. He even discussed how those developments may impact Tristan Thompson‘s playing time once he is ready to return from a right ankle sprain.

“Well certainly what Z has done in the last couple of weeks that he’s been playing, he has shown that he deserves to be on the floor,” Drew said following the win. “Getting Tristan back, right now not really knowing how we’re going to juggle this thing, but I will say it’s a nice problem to have. We haven’t had that luxury.

“But the things that Z does on the floor, first of all he’s big and he’s real active around the glass. He gets his hands on a lot of balls and he’s a good finisher around the basket. But that’s a nice problem to have because he certainly has shown over the last couple of weeks that he deserves to play. That’s something we as a staff, we’re going to have to make some decisions.”

Thanks to the plethora of recent injuries to the Cavs’ roster, the Croatian national has seen a sizable uptick in his usage. So far, he has put it to very good use. In the last five games, Zizic has averaged 10.6 points and 4.6 rebounds in 15.6 minutes per game.

Even LeBron James reflected on what he’s seen from his young teammate in the last couple of weeks.

“This league is all about opportunity,” James said from the Cavs’ locker room. “Guys getting injured has given him an opportunity to play and he’s played some really good ball for us. Finishing around the rim, getting extra possessions, blocking shots. It’s very key for our ball club.”

The Cavs have struggled to overcome the multiple injuries on their roster as of late and have won just three of their last six games. If Zizic can continue to develop as the season progresses, however, it could all be worth it.

The Cavs are all but guaranteed a spot in the upcoming playoffs, and if the 6-foot-11 center can continue to serve as a viable option on both sides of the court, it would make the Cavs that much more dangerous once the postseason begins.

Zizic’s development could be put on hold as Thompson nears his return to the court. While the initial two-week timetable for his injury has come to pass with no indication that he is ready to play, it is possible that he could be back on the court in the next few days. When that does occur, it will be fascinating to see if the Cavs choose to rely on Thompson’s veteran presence or Zizic’s exciting potential.

Either way, as Drew said following Monday night’s victory, it is a good problem to have.