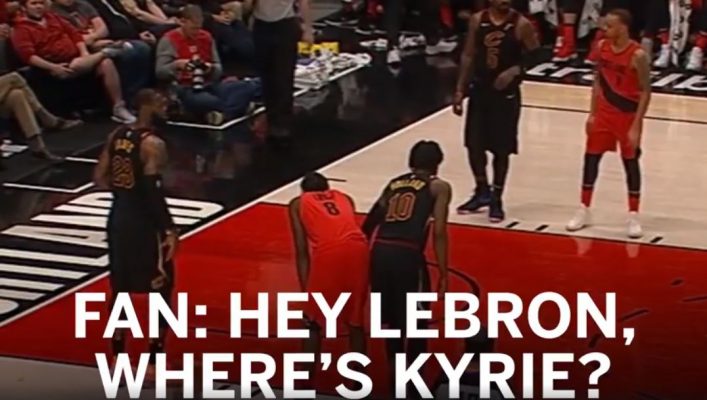 During his 15-year NBA career, Cleveland Cavaliers forward LeBron James has received plenty of adulation from fans, but has also had to deal with his fair share of hecklers. During Thursday night’s game between the Cavaliers and Portland Trail Blazers, the latter instance occurred with James quickly getting the best of his detractor, after having been asked where former Cavs point guard Kyrie Irving was.

LeBron has perfect response to fan

Irving and James had teamed to take the Cavaliers to three consecutive NBA Finals, which included winning the 2016 NBA title. However, last summer, Irving asked to be traded, citing James’ dominating presence as a key reason for the request. Though a brief rift developed as a result, James ended up selecting Irving to play on his team in the NBA All-Star Game last month.

The departure of Irving has resulted in a season-long struggle for the Cavaliers to replace him. The team’s play during the first few weeks of the season and especially over the past three months have been the best example of those struggles, though injuries to other players have also played a key role in such problems.