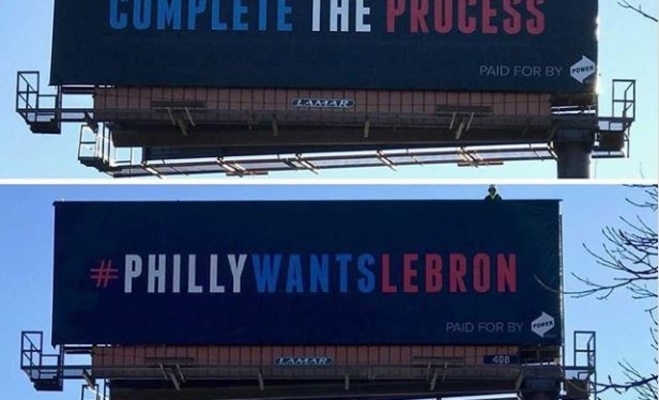 It’s no secret that the Philadelphia 76ers are making their case to lure LeBron James from the Cleveland Cavaliers to Philadelphia.

Back in late November, it was reported that the 76ers are planning to make a play for James when he becomes a free agent this offseason. Last week, 76ers star Ben Simmons posted a picture of him and James and hinted at his own interest in playing alongside the four-time MVP.

Now, Philadelphia has played its latest move in the form of three billboards that appeared along the highway to downtown Cleveland on Monday morning.

The company that erected the billboards, Power Home Remodeling, was likely inspired by the Academy Award nominated film, “Three Billboards Outside Ebbing, Missouri.” It seems to be using the same technique featured in the film to get James’ attention leading up to Thursday night when the 76ers travel to Cleveland take on the Cavs in a nationally televised game.

“We’re passionate about Philadelphia,” said Asher Raphael, the company’s co-CEO. “We have an amazing city, it’s the best sports town and it’s an awesome place to live. We think the best athletes should want to play here.”

Raphael added that he thinks James signing with Philly could be a mutually beneficial decision.

“LeBron is in the conversation of being the best player of all time,” Raphael said. “We think if he comes to Philly, he gets a couple more championships.”

Recent reports seem to indicate that James is interested in re-signing with Cleveland this offseason, but as all fans of the NBA know, that could change at any moment. As the 2017-18 season begins winding down, fans can expect to see even more explicit pitches from the 76ers and many other cities and teams across the NBA.