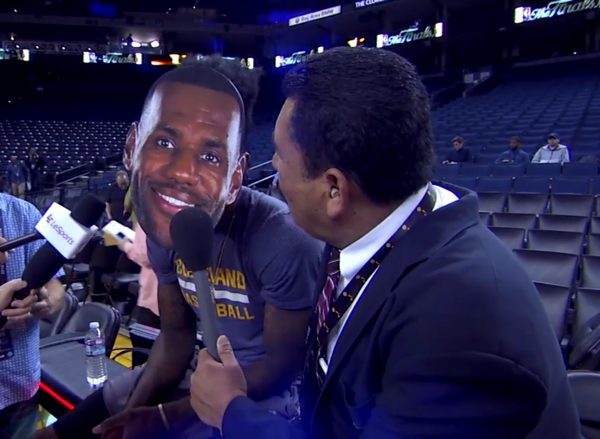 LeBron James has officially arrived in Los Angeles for the 2018 NBA All-Star Game and with that kind of exposure comes quite a bit of questions from the press.

On Saturday, James sat down with reporters to discuss his 14th All-Star Game, the recent controversy circulating a feud with a Fox News anchor, and more. He also finally acknowledged television personality Guillermo Rodriguez from “Jimmy Kimmel Live,” who has tried and failed to get an interview with James for several years.

“Mr. LeBron, I’ve been waiting for you to talk to you, Mr. LeBron, for many years,” Guillermo said. “I just want to say, Mr. LeBron, can you describe your perfect salad?”

James then decided to give Guillermo the opportunity he’s been waiting for:

“I don’t have a perfect salad,” James responded. “Just a lot of protein. I need protein, I need a vegetable, I need a fruit.”

Guillermo then interjected to offer a Chinese chicken salad as a possible option:

“That’s cool too,” the All-Star said cracking a smile.

James quickly moved on to to another question, but Guillermo was not quite finished:

For a veteran like James, there aren’t many things that can truly surprise him at this point in his career, but he certainly surprised Guillermo by deciding to give him the time of day. Guillermo got his day in the spotlight today, but given his question, it may be quite some time before he gets another chance to interview King James.