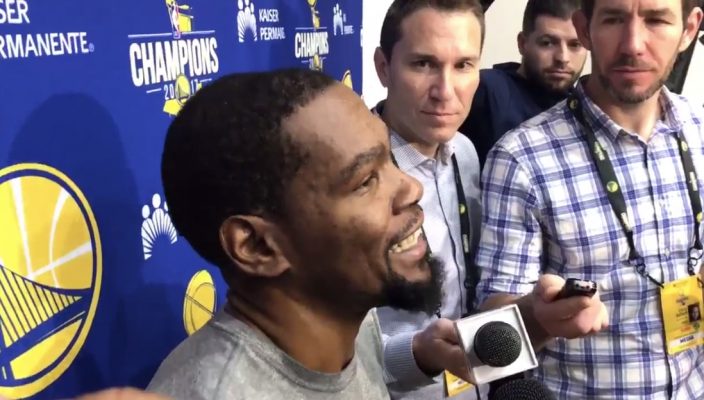 The explosive rumor that Cleveland Cavaliers forward LeBron James might consider signing with the Golden State Warriors this summer, when he’s expected to be a free agent, brought with it the expected firestorm from such speculation. One key member of the Warriors, Kevin Durant, offered a succinct response to the rumor:

What was Kevin Durant’s first thought when he saw report of LeBron James being willing to meet with #Warriors in free agency?

The chance that James signs with the Warriors is likely remote at best, primarily because of salary-cap concerns. In the scenario laid out, the Warriors would deal Klay Thompson and Andre Iguodala, with Durant himself supposedly making the decision to take less money in order to make James’ would-be deal fit within the constraints of the team’s salary cap.

Right now, there’s no indication that James is even looking elsewhere or that the Warriors would consider signing him. Having faced him in each of the last three NBA Finals, they’re well aware of what he can do on a basketball court. However, disrupting their current chemistry probably isn’t among their strategic initiatives.