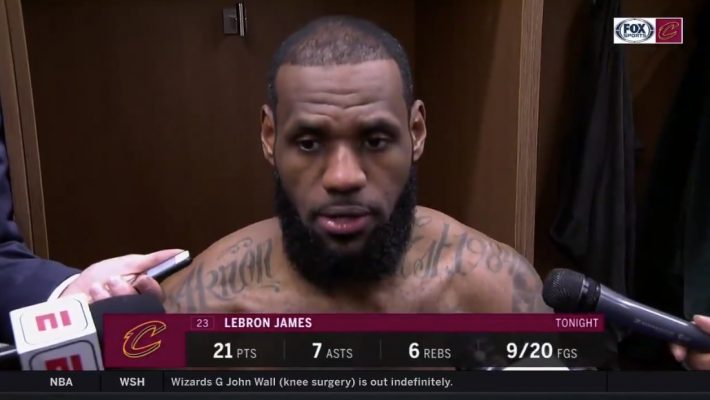 The devastating injury to Cleveland Cavaliers forward Kevin Love made a bad night even worse for the team, which lost 125-114 to the Detroit Pistons. Love suffered a fractured left hand in the first quarter of the game and LeBron James was asked after the contest about the impact of losing a player of Love’s caliber.

LeBron James' reaction to losing Kevin Love to a fractured hand in tonight's loss to the Pistons. pic.twitter.com/ONFRsmJyEs

“It’s a huge blow for our team, obviously. Anytime you lose an All-Star or you lose anybody, a part of your crew, it’s a tough blow. We’re already limited in our bigs anyway,” James said. “We even get a lot smaller now, but at the end of the day, we hope for a speedy recovery for Kev and hope he can get back on the floor as soon as he can. It’s a tough blow for us.”

Veteran Channing Frye, who becomes more important as a result of Love’s injury, attempted to take a more positive approach to the situation, first noting how the team reacted after being given the news about the scope of the injury.

Channing Frye keeps a positive frame of mind when discussing the news of losing Kevin Love to a fractured hand. #AllForOne pic.twitter.com/3uGigzBQzQ

“You just chew on it for a little bit, and you say, ‘Ok,'” Frye said. “But you know, things happen. It’s a hand, not a knee, not a foot, and it’s his off hand. It could be worse, it could be worse and Isaiah Thomas used to tell me, ‘It could be a lot worse,’ so it could be worse. Right now, he’s in good spirits, he’ll be nice and rested for the All-Star break.”

Love is likely to miss six to eight weeks, which could keep him out until early April. His absence could make it more likely that the Cavaliers will deal for a big man prior to the NBA trade deadline, which occurs on Feb. 8.