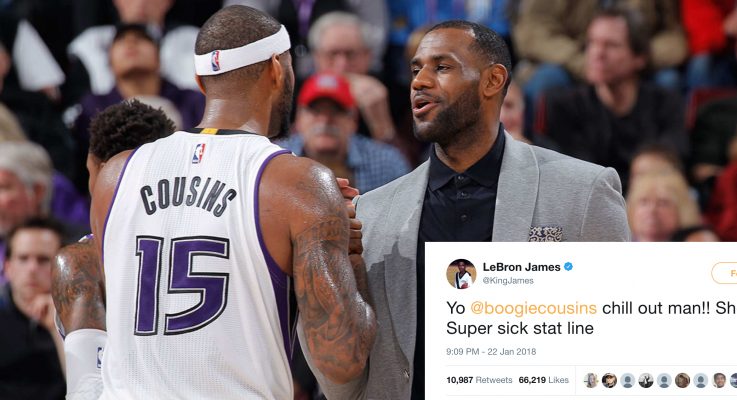 LeBron James has been known to try to recruit players to come play alongside him throughout his career. Fans wondered if that’s what James was up to on Monday night after he tweeted at DeMarcus Cousins following his monster game in which he posted a historic stat line of 44 points, 24 rebounds, and 10 assists.

The Cleveland Cavaliers were linked to Cousins earlier this season after it was reported that they were interested in bringing him to Cleveland. While the New Orleans Pelicans have since clarified that they have no intention of trading Cousins away before the Feb. 8 NBA trade deadline, that didn’t stop James from showing up in Cousins’ mentions.

This could simply be one NBA superstar congratulating another on his success, but it is possible that James is trying to create inroads with the All-Star big man.

While James may know that the two playing together this season is unlikely, that doesn’t mean they won’t be wearing the same uniform in the future. Both James and Cousins are set to become free agents this offseason. It’s possible that the King sees Boogie as a potential piece on his next super team.

It’s hard to decipher whether James’ tweet means he is trying to bring more talent to Cleveland, or if it means he is already looking towards his next destination. One thing is clear though, James’ relationship with Cousins is definitely something to keep an eye on as we approach the 2018 NBA offseason.