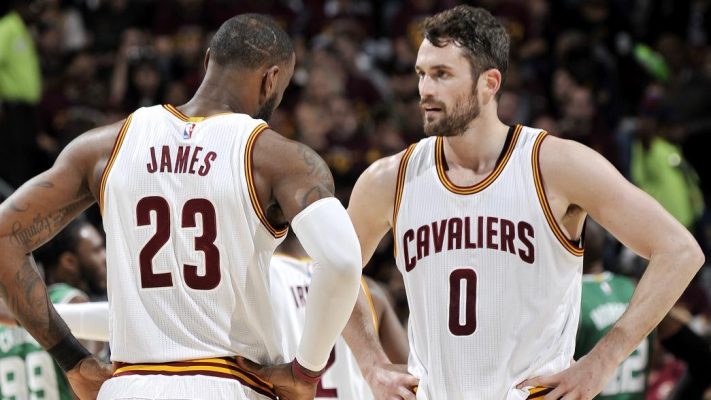 LeBron James currently holds the second most votes amongst all NBA players to be sent to the 2018 NBA All-Star Game. He doesn’t seem to be too concerned with his own status, however. Instead, he seems more committed to getting his Cleveland Cavaliers teammate Kevin Love to Los Angeles for the All-Star Game festivities next month.

Love currently sits in fifth place in voting amongst forwards and centers in the Eastern Conference and James took to Twitter on Sunday to make it clear that he thinks Love should be considered a shoe-in for the game.

#NBAVote @kevinlove to the All-Star game! I mean just look at his monster year so far! I see you working boooooiiiiii!!

Love is already a four-time All-Star and has continued his impressive form during the 2017-18 campaign, nearly averaging a double-double with 19.8 points and 9.8 rebounds per game.

James, a 13-time All-Star in his own right, wasn’t the only one to campaign for Love. The Cavaliers’ official Twitter page also endorsed Love, quoting James and telling fans to vote for their starting center.

“@KevinLove is our All-Star power forward…our All-Star center now and he has been playing that type of basketball all season.”

RETWEET if you agree with LeBron and want to send Kevin Love to @NBAAllStar! #NBAVOTE pic.twitter.com/tLCtcQyNUE

All-Star Weekend is still over a month away, but polls are only open until Jan. 15, so now is the time to vote for your favorite stars.

If James gets his way, both he and Love will be heading to Los Angeles to represent the Cavs in the game on Feb. 18.