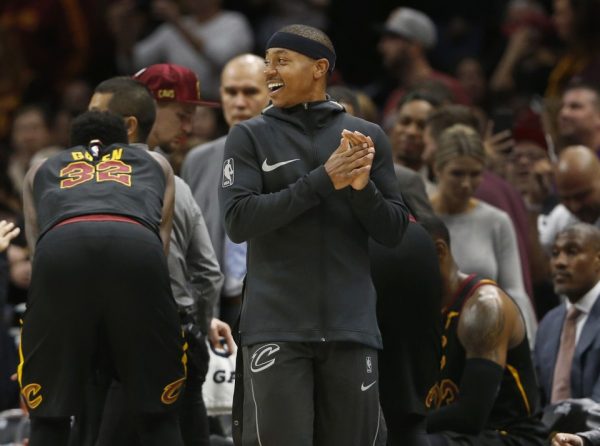 The Cleveland Cavaliers are certainly taking their time to ease Isaiah Thomas back onto the court.

Several weeks ago, it was reported that the Cavs were targeting a late December return for the point guard. There was hope that Thomas would be able to play in the marquee Christmas Day matchup against the Golden State Warriors, however, that game has come and gone and now it seems that Thomas may not be able to play in an upcoming game against his old team, the Boston Celtics, on Jan. 3 either.

Joe Vardon of Cleveland.com reported that there are growing questions around Thomas’ much-anticipated return:

“Now it sounds like Isaiah Thomas won’t play for the Cavaliers in 2017, and there’s doubt growing on his availability for his anticipated return to Boston Jan. 3.”

It isn’t all bad news, though. While the report seems to indicate that Thomas may have suffered some kind of setback in his recovery, that does not seem to be the case. Cavaliers head coach Tyronn Lue recently said that he was holding a team practice on Friday to “get some shots up, cover defensive rules and principles and also scrimmage a little bit so Isaiah can get a feel and play 5 on 5.”

“It’s virtually out of the question for a player to play in back-to-back games after being out since May with hip injuries,” he wrote. “So, if Thomas were to play against the Blazers, it would be hard to believe he’d also play against the Celtics the next night, even though that’s the team which traded him to Cleveland in the offseason.

“Also, there was reluctance from both the Cavs and Thomas for his first game to be a marquee opponent like the Warriors, which was among the reasons he sat out the Christmas game. The Celtics, with Kyrie Irving as the point guard, certainly count as a marquee opponent.”

Finally, Vardon pointed out that Thomas’ version of Kobe Bryant’s signature shoe is set to release on Jan. 6 when the Cavs play the Magic in Orlando.

“Does Nike know something we don’t?” he wrote.

Surely it would be an incredible sight to see Thomas finally return against his former team, but there is no doubt that his health takes precedence over any potential matchup. Still, it’s unfortunate that Thomas may miss a chance to stick it to his former squad with his new team. The good news is that just over a month later on Feb. 11 Thomas will have an opportunity to do the very same thing when the Cavs travel to Boston to take on the Celtics on their home court.