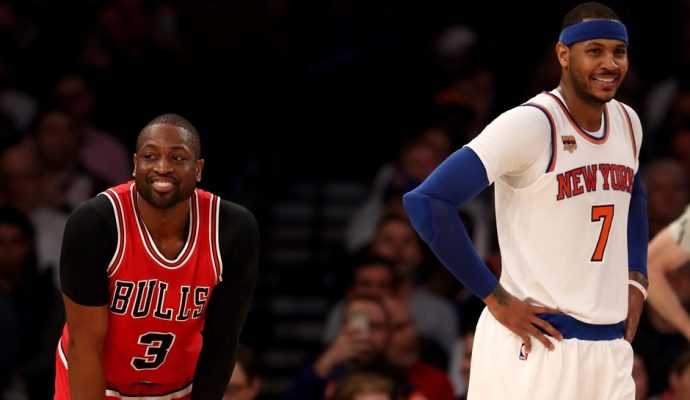 After the Cleveland Cavaliers‘ frustrating 104-97 loss to the Dallas Mavericks on Monday night, LeBron James seemingly focused some anger and frustration on TNT analyst Charles Barkley.

Barkley had recently criticized James for demanding that his front office add another playmaker to the roster, calling the four-time MVP’s comments “inappropriate” and “whiny.” James’ response was heated and highly personal as he called out the former Phoenix Suns big man on a variety of topics including his problems with gambling and suggested he did not give the NBA a good name.

Here's full Wade quote on LBJ/Barkley. Never tried one of these emoji things before but believe this is considered ? pic.twitter.com/EFAOorIw8x

Contrary to Wade, Anthony took a much more mellow approach in addressing James’ comments, and focused on sympathizing with his friend as he discussed the beef:

“At the end of the day, I think he’s human, like we all are human,” said Anthony. “Even though we are considered these kind of super heroes and super athletes, nothing is supposed to affect us and we’re supposed to just go through life just taking it on the chin. It affects us in certain ways. I think in his situation maybe he just got tired of hearing it from that particular person.”

Early Tuesday afternoon, Barkley went on ESPN Radio to defend himself, so James may need his allies in what could be a long-term beef between the two NBA legends.