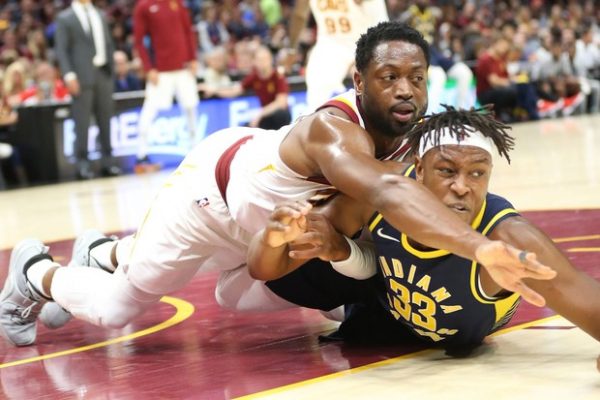 (Cleveland, OH) — A fourth-quarter comeback against the reserves for the Cleveland Cavaliers helped the Indiana Pacers come away with a 106-101 comeback victory in preseason action at Quicken Loans Arena on Friday night.

The loss came as a result of Indiana outscoring Cleveland by a 28-15 count in the final period. However, a combined 52 points from the new trio of Dwyane Wade, Jae Crowder and Derrick Rose served as a bright spot on the night for the Cavaliers, who remain winless in their two preseason contests.

Both Wade and Crowder saw their minutes bumped up from 15 in Wednesday night’s opener to 22 for this contest, while Rose was limited to just 14, but scored 15 points and handed out three assists. Wade led the Cavs in scoring with 20 while also grabbing five rebounds, and Crowder contributed 17 and grabbed six boards. Kevin Love had an effective all-around night in his 22 minutes, scoring nine, hauling down seven rebounds, dishing out five assists and collecting three steals.

For much of the first quarter, the game was a series of runs, with Indiana taking some small steps at the outset by scoring the first four points. That led to a 19-1 Cavs run, which was followed by an 11-1 run by the Pacers. During that surge by Cleveland, Indiana missed 10 consecutive shots, so by the time the horn had sounded to end the quarter, the Cavs held a 32-21 advantage.

Indiana stayed cold in the early stages of the second period, missing six of its first seven shots. Thanks to the combination of 29 points from Rose and Wade, the Cavaliers managed to maintain a double digit lead during the quarter and eventually headed to intermission with a 59-48 advantage. The 35-year-old Wade even managed to contribute a reverse dunk as part of his scoring contributions.

At halftime, Wade spoke about what Rose’s ability to score and resemble his former MVP self can do for the Cavaliers:

“It opens up things for everybody else. He’s putting so much pressure on the defense,” Wade said. “He’s a great finisher. He just plays the game at his own pace. He don’t speed up and he ran the first unit well during the first two games.”

The Pacers were able to get the margin under double digits once play resumed, making the most of their field-goal attempts during the quarter by connecting on 73 percent of their 15 attempts. Still, the Cavs entered the final 12 minutes with an 86-78 lead.

While both teams moved the ball well during that opening half, the Cavs maintained control of the boards during the first three quarters. That was especially true on the offensive side of the glass, with Cleveland holding a 12-4 edge on that side of the ledger. In that fateful final quarter, the Pacers managed to grab all three of the total offensive boards.

Once again, the Cavaliers were without the services of LeBron James, who was given one more night off to rest the ankle he injured last week in practice. In addition, Iman Shumpert sat out the game after injuring his foot on Wednesday night, with both players expected to be ready when the regular season begins on Oct. 17.

The Cavaliers continue their brief preseason with the third of five games taking place on Sunday afternoon. The team’s first road clash will be in Washington, when they face the Wizards in a game set to tip off just after 3 p.m. ET.