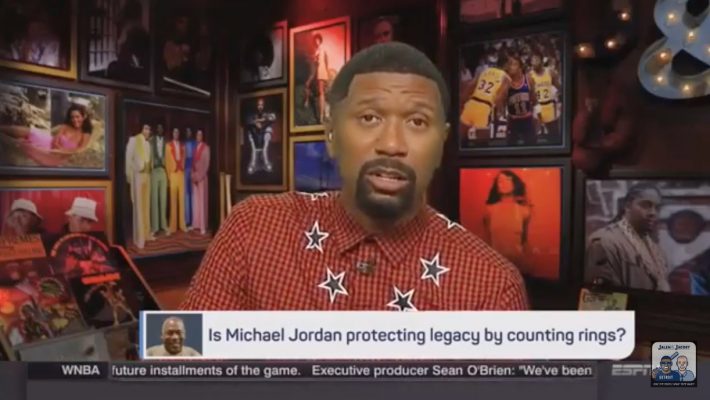 Michael Jordan made news on Wednesday when he answered a question from a young fan regarding who the better player is between Kobe Bryant or LeBron James. Jordan pegged Bryant as the better player, saying his five rings stack up better compared to James’ three.

“Is Michael Jordan using counting rings as a measure of success just a way to sort of solidify his own legacy,” Jacoby asked.

“Yes. But also for fans, for media, and for players, that logic is so tired,” he said. “And also just look at it this way. Robert Horry, who was never an All-Star, who is not in the Hall of Fame, has more rings than Michael Jordan.”

“And also I kind of feel like he is using picking Kobe over LeBron because he is somewhat threatened by LeBron,” he began. “LeBron James’ last season was phenomenal. His Finals performance was like nothing we’ve ever seen before from a basketball player and I feel that there’s a little piece of Michael Jordan that’s threatened by LeBron James. Do you agree?”

“Absolutely, but also we have to respect the fact that LeBron James was the best player on every team that he had that won a championship. Probably been the best player on every team he’s ever played on. It’s hard, especially early in his career, can you name two of the starters that went to the Finals when they lost to the Spurs?” he asked. “So Kobe Bryant was traded to the Lakers, but they’re a storied franchise. He got the chance to play with Shaquille O’Neal, the aforementioned Robert Horry, be coached by Phil Jackson, played with Pau Gasol. So while LeBron James continues to ascend, and it can be viewed as neck-and-neck right now if you’re going to say who’s better all-time between the two, but the logic again is dumbed down when you say, ‘Because he has more rings he’s a better player.’”

See the interaction in its entirety below.