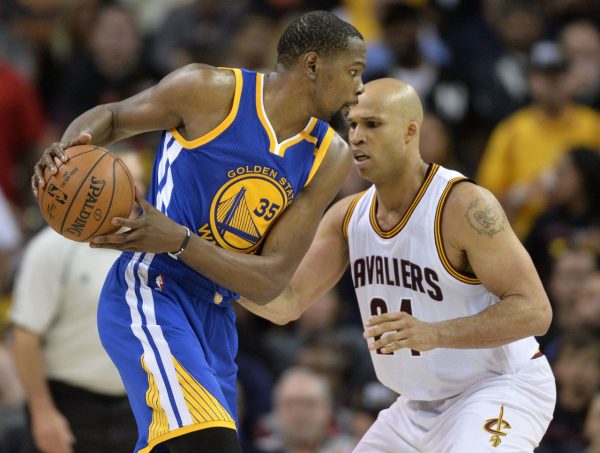 One of the main problems the Cleveland Cavaliers have had during the first four games of the NBA Finals is the struggle in attempting to defend Golden State Warriors forward Kevin Durant. However, one player who has actually been able to succeed somewhat in that task is veteran reserve Richard Jefferson, who reportedly begged Cavaliers head coach Tyronn Lue to take on that role.

The 36-year-old Jefferson was blunt in that request, according to Jason Lloyd of The Athletic:

Lue heard Jefferson’s pleas for three games before finally giving him the opportunity in Game 4, with the Cavs’ season on the line. The result was that during his 22 minutes, Jefferson was able to limit Durant to 1-of-7 shooting from the field, while also being much more physical on the player who had thrived during the Warriors’ three wins to start the series.

Having Jefferson take on the job of defending Durant meant that LeBron James could battle Draymond Green, whose usual production has dipped during the course of the Finals. The fact that the Cavaliers won Game 4 is a clear indication that the team plans on continuing this approach for however long the series continues.

Immediately after Cleveland won the franchise’s first title last year, Jefferson announced his retirement, a decision he changed just a few weeks later. That change of heart could turn out to be a huge bonus if the Cavaliers are able to pull off the miracle of becoming the first NBA team to come back from a 3-0 deficit in a postseason series.

The next step in that monumental effort will take place at Oracle Arena on Monday night, with tipoff set for just after 9 p.m. ET.