J.R. Smith Says Warriors Have Guy That ‘Keeps Kicking People in the Nuts’ 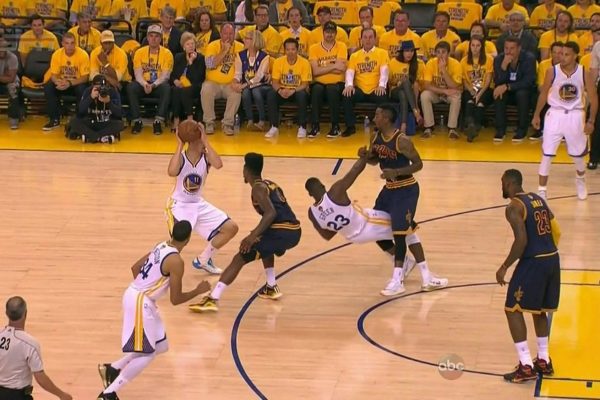 The need for the Cleveland Cavaliers to be more physical as they prepare for Game 2 of the NBA Finals is a strategy that’s worked during past Finals meetings with the Golden State Warriors. However, Cavs guard J.R. Smith took exception on Saturday when that physicality was described as “dirtying up the game,” contrasting Cleveland’s play with that of one Golden State player.

Cavaliers' J.R. Smith on Warriors' Draymond Green: "They got one guy who keeps kicking people in the nuts." pic.twitter.com/vnsHXDt0Xu

Despite not actually naming the player, it’s clear that Smith was referencing Warriors forward Draymond Green. In last year’s Western Conference Finals, Green twice delivered kicks to the groin of Oklahoma City Thunder center Steven Adams and somehow avoided being suspended for those actions. However, he was on thin ice with NBA disciplinarians, ice that eventually cracked during Game 4 of the Finals when he punched at the groin of the Cavaliers’ LeBron James.

Two days after that contest, Green was suspended for Game 5, which the Cavs won. That was the first step in what became a historic Cleveland comeback from a 3-1 deficit and delivered the franchise its first-ever title.