Cavaliers to Increase Physicality With Warriors in Game 2 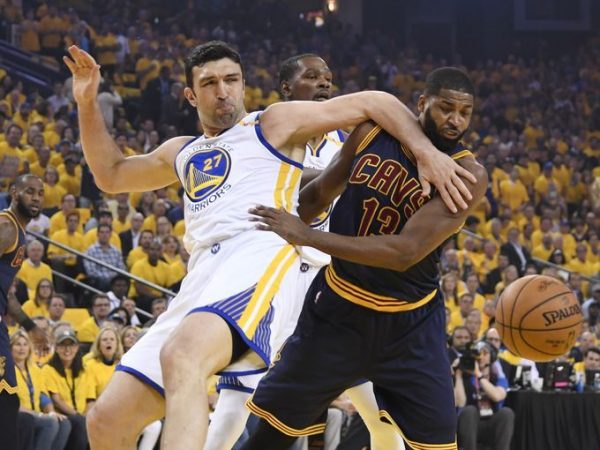 For the defending champion Cleveland Cavaliers, Game 1 of the 2017 NBA Finals was a defensive struggle in their lopsided 113-91 loss to the Golden State Warriors.

The Cavs made headlines for all the wrong reasons on Thursday night when they became the first team in NBA Finals history to not record a steal on defense.

Cleveland turned the ball over a whopping 20 times compared to Golden State’s four turnovers, and Cavs power forward Kevin Love acknowledged that they immediately need to make changes for Game 2:

“The onus is definitely on us,” Love said. “That’s a mindset. Like I mentioned, we need to understand when to take fouls, when to be super assertive, super aggressive on the defensive end, and in the open court know how we’re going to fan out to different defenders, not open up the lane for certain guys, and just make second and third efforts to get the 50-50 balls.”

Cavs center Tristan Thompson, who is one of the Cavs’ most physical players on the court, did not have much of an impact in Game 1. In 23 minutes of action, Thompson managed only four rebounds and did not score any points.

“He’s one of the best offensive rebounders in the league, so they’re doing a good job of making sure they get two guys on him, two guys hitting his body to keep him off the glass,” Cleveland head coach Tyronn Lue said of Thompson’s impact. “When you play good defense and Tristan is getting offensive rebounds, that demoralizes your defense. We got to continue to keep playing. It was one game. And he’ll get more the next game.”

Love, who had 15 points and an eye-opening 21 rebounds in Game 1, echoed his coach’s words and praised Thompson:

“I think Tristan will come out in Game 2 and be a lot more assertive and just use his will to get rebounds on both sides of the ball,” Love said. “He’s so capable and so good at doing that, no matter who we’re playing, against any team in the league.”

In order for the Cavs to get their defensive rhythm going, Love said that he and his teammates need to be much more physical and disrupt the Warriors’ dynamic offense.

“I think just make them feel us,” Love said during a conference call with reporters on Friday. “That’s something that I imagine Ty probably talked about (with the media) and we can definitely do a better job of.”

Love offered a lot of praise for the Golden State offense, which seemed to do whatever it wanted on Thursday night.

“They were really good on both sides, being in attack mode — whether it was playing downhill (on offense) or on the defensive end pushing us out, making the catches tough for us,” Love said of the Warriors. “I think at certain points we did that, but we have to do that throughout. That’s how you have to play against a team like them, because if they’re able to move freely and set good screens, the guys are able to just get a little bit of space or a little bit of breathing room, they could be so effective. That’s what makes them tough.”

The Cavs will get the chance to adjust to a more physical style of play on Sunday night as they look to tie up the series with the Warriors at 1-1.