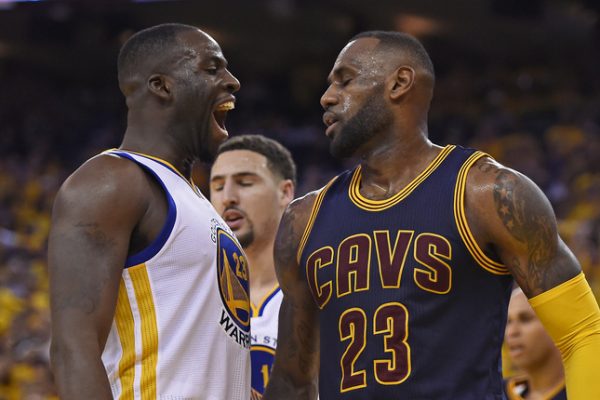 The rivalry between the Cleveland Cavaliers and Golden State Warriors has plenty of central characters connected to it, including LeBron James for the Cavaliers and Draymond Green for the Warriors. Green has made repeated efforts to stoke the fires between the two teams over the past few years, with the most recent attempt coming on Monday when he complained about the level of competition that the Cavs have faced during their current playoff run:

“I thought teams would compete a little harder,” Green said. “I just watched San Antonio-Houston. I like to watch good basketball. When you watch Cleveland play, you’re only watching one side of the good basketball. That’s kind of weak.

The Cavaliers have won all eight of their playoff games thus far this postseason, with the Warriors one win away from accomplishing the same feat, entering Monday night’s road game against the Utah Jazz. Despite that similarity, Green doesn’t see that current one-game difference as a source of motivation:

What’s ironic about Green’s complaint is that Golden State has won its seven playoff games by an average of 13.7 points, compared to Cleveland’s 8.3 average in its eight clashes. Despite that fact, he claims that the Warriors have been put to a greater test thus far:

“I think Utah is still playing good basketball,” Green said. “Regardless if they win or not, I think we’re a better team. But at the same time, they still play a good brand of basketball.”

Should the Cavaliers and Warriors again reach the finals, the matchup would make NBA history, becoming the first time the same two teams have met in the finals for three consecutive years. Despite that possibility, Green hasn’t begun to focus yet on facing the Cavs:

“No, we have a long way to go,” Green said. “We still got to get five more wins before we can even think about participating in the NBA Finals.”

Green is seemingly never at a loss for words, though he’s no doubt looking to stay on his best behavior during the remainder of the postseason. That’s because an ill-advised punch at the groin of James in Game 4 of last year’s NBA Finals led to a one-game suspension, with the Warriors leading the series 3-1. They failed to win another game as the Cavaliers went on to capture the franchise’s first title.