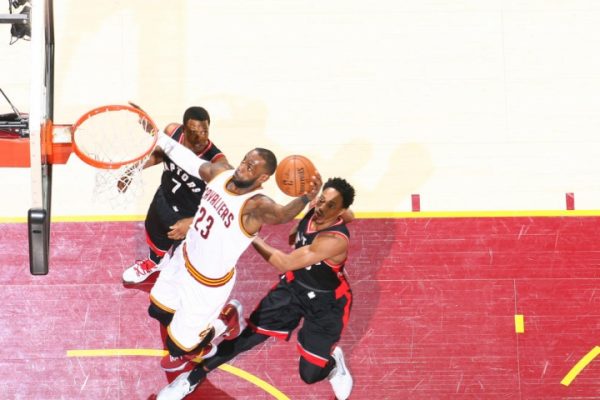 (Cleveland, OH) – Showing no ill effects after not having played for eight days, the Cleveland Cavaliers used 35 points from LeBron James to put away the Toronto Raptors by a score of 116-105 in Game 1 of the Eastern Conference semifinals on Monday night at Quicken Loans Arena.

James ended his 41 minutes of play with a double-double with 35 points and 10 rebounds, while adding four assists. His performance once again added to his array of milestones as he tied future Hall of Famer Kobe Bryant at 88 for the second-most playoff games in history with 30 points or more.

“I feel like I’ll be a lot better on Wednesday,” James said immediately after the game. “We just need a little bit of rhythm here, some conditioning and we’ll be good.”

The Cavaliers held a lead for virtually the entire contest, but had to periodically fend off comeback attempts by the Raptors along the way. The key point of the contest came during the third quarter, after Toronto had gone on a 10-1 run early to cut the margin to just seven at 65-58. At that point, the Cavaliers put the game away with a 31-13 run over the rest of the period. That gave them a commanding 96-74 lead heading into the final 12 minutes.

The Raptors never seriously threatened the rest of the way, with their late push helping to reduce the final margin. The victory helped keep Cleveland undefeated in its five postseason games this year and also marked the eighth consecutive win for the Cavs in the second round of the playoffs.

“Just playing with pace is the biggest thing and a good sign,” Cleveland head coach Tyronn Lue said. “In the first half, they had 15 points in transition. In the second half, they only had six points.”

“We stayed resilient and we knew what the game plan was,” Irving said. “It was about time we got back on the court and now, we just have to get the wheels back on.”

The Cavaliers collectively dished out 26 assists and only committed 12 turnovers on the night, eight of those miscues coming during the final quarter when the game was effectively decided. They also showed an aggressive nature by making it to the foul line 29 times, while reversing recent struggles by hitting on 24 of their attempts (83 percent) from the line. A total of 13 of those free throws came during the third quarter, when Cleveland took control of the game.

“We want to continue to move the ball like that and the fact that we had a low turnover game is a good playoff formula for victory,” James said.

The Cavaliers jumped out to a 30-18 first-quarter advantage as Irving contributed 12 of those points, while their defense limited Toronto to just 33 percent shooting from the field. James spoke about the pre-game concern that the team’s layoff would be a problem:

“That was the mystery when we came out, but our energy was phenomenal and we pushed the tempo,” James said.

The prospect of a blowout then seemed to be developing as the Cavs scored eight of the first 10 points of the second period to make it 38-20. However, things changed drastically as the Raptors connected on 7-of-8 from the field as part of a 19-3 run that chopped the margin to two points at 41-39. Holding off that burst, the Cavaliers then put together eight unanswered points and then used the final four minutes to go on a 13-4 run to take a 62-48 lead at intermission.

“When they came back with that surge in the second quarter, we kept our composure. We won’t get lax and won’t get comfortable, we just have to stay the course,” Lue said. “Last year, we went up there and got our butts kicked in two games, so we know what’s at stake.”

The Cavaliers and Raptors will meet again in Game 2 on Wednesday night. Tipoff for that game at Quicken Loans Arena will be just after 7 p.m. ET.