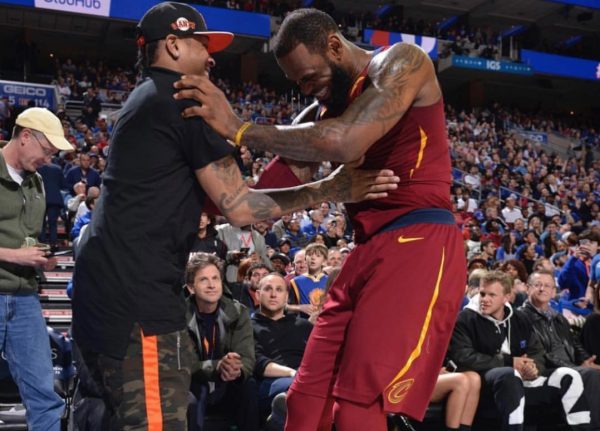 Cleveland Cavaliers forward LeBron James played a key role in nearly pulling off a miraculous comeback during Friday night’s loss to the Philadelphia 76ers, collecting another triple-double for the night. Yet one of the 76ers’ legendary players, Allen Iverson, took to social media to praise James for his efforts as a role model and on behalf of African-Americans.

My man for life!!! Thank u for what you’ve done for our ppl, our culture & being the greatest role model to our kids!!!

In the game itself, James finished with 44 points, 11 rebounds and 11 assists as the Cavaliers dropped a 132-130 decision after trailing by 30 points during the first half. Those competitive heroics go hand in hand with James’ growing presence off the court, which include establishing a family foundation that provides college scholarships for students in his hometown of Akron. James has also donated money for an exhibit on Muhammad Ali at the National Museum of African-American History and Culture in Washington, D.C.

From a social perspective, James has also become more vocal about issues affecting the African-American community and has taken on President Donald Trump about his actions and remarks over the past few years.

Iverson spent the bulk of his 14-year NBA career as a member of the 76ers, with his production ultimately leading to induction into the Basketball Hall of Fame in 2016. That destination is also in the future for James, though he shows no signs of even considering retirement in the next few years.