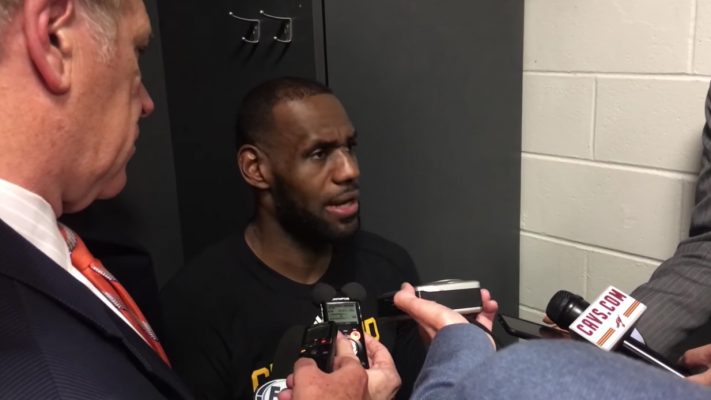 The Cleveland Cavaliers suffered a monumental collapse on Sunday afternoon as they gave up a 26-point fourth-quarter lead to the Atlanta Hawks to eventually lose the game in overtime, 126-125.

Maybe the biggest shot of the game came after point guard Kyrie Irving had been controversially tied up in the corner in the closing seconds of regulation. This resulted in the Hawks’ Paul Millsap hitting a baseline jumper to send the game into overtime.

According to superstar LeBron James, Millsap should’ve never had a chance to take that shot because he insisted that he called a timeout as soon as he saw his point guard trapped in the corner. However, James says he was never granted the call because of an unusual response referee Leroy Richardson gave him.

“I’m sitting right next to the ref, and the explanation he gave me, I never heard in my 14-year career. Never.

“He told me that I’m not allowed to call timeout because he didn’t know who had possession of the ball,” James said, relaying what Richardson said to him. “And I was the one who entered the ball to Kyrie. And as soon as I seen Millsap go trap Kyrie in the short corner, I looked at him and called timeout twice — at least twice — and he wasn’t even paying me no attention. And that’s when the jump ball happened. I said, ‘Why?’ He said, ‘I can’t call timeout because I don’t know who has possession of the ball. I don’t know what’s going on. I don’t know the tie up.’ I said, ‘That doesn’t make any sense because we have the ball. I entered the ball to Kyrie so you shouldn’t even be worried about the tie up or not, I’m calling it as soon as I saw Kyrie is getting tied up in the corner.’

Unfortunately for James and the Cavs, that was just the first of several questionable calls down the stretch.

With 18.7 seconds left in regulation and the Cavs clinging on to a four-point lead, James was called for a surprisingly quick five-second call.

“It was pretty quick,” James said of the five-second count.

What may have been the final nail in the coffin was when James was called for his sixth foul. With 1:52 left in overtime, James and Millsap both went for a rebound, however James saw that he was too close to Millsap, so he intentionally put both his arms down to avoid being called for a foul. Nonetheless, the whistle blew as a flabbergasted James was sent to the bench with his sixth foul.

“Yeah, it wasn’t a foul on my sixth foul,” James said. “I knew I had five. I knew the ball was going long. So, I may have grazed Millsap a little bit but I mean, throughout the course of a game (that happens). I didn’t push him or anything like that.”