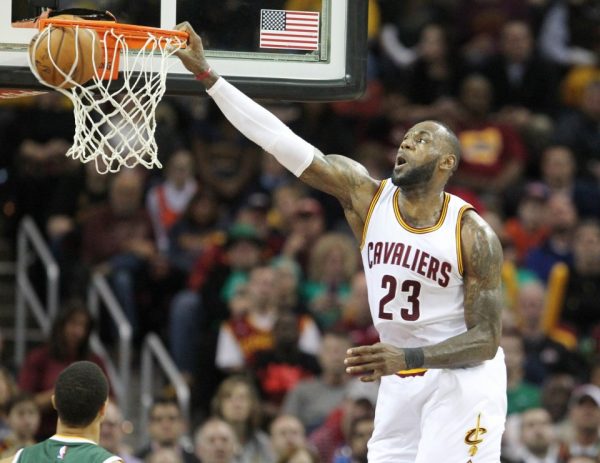 (Cleveland, OH) – LeBron James scored 17 of his game-high 33 points in the fourth quarter to power the Cleveland Cavaliers to a hard-fought 91-83 win over the Utah Jazz at Quicken Loans Arena on Thursday night. For good measure, the last of James’ six assists on the night allowed J.R. Smith to drill what proved to be the clincher with 1:10 left in the game to make it 89-83.

With the score deadlocked at 67 entering the final quarter, James served as the focal point of the Cavs’ offense during the final 12 minutes. At the 2:12 mark, his layup gave Cleveland an 86-81 advantage and after Utah had made it a one-possession game, James’ pass to Smith served as the backbreaker. The heroics of James were required after Kyrie Irving left the game with left knee tightness and Iman Shumpert was forced to depart with left shoulder trouble.

After the game, Cavs head coach Tyronn Lue indicated that neither of the injuries was particularly worrisome:

James managed to collect a double-double with 10 rebounds, and was joined by three other teammates who scored in double figures. Irving added 21 points, four assists and four rebounds, while Smith contributed 12 points, all of them coming on 3-pointers.

“Dig deep, get some timely stops, execute offensively and just stay composed,” James said about his fourth-quarter performance. “It’s a great team we’re playing against and obviously, not a lot of people know about them because they’re not on national TV all the time. But they’ve been playing really great basketball and it’s a really good win for us.”

The last member of the double-figures contingent was Cavs forward Kevin Love, who had missed the past five weeks after recovering from arthroscopic knee surgery. He connected on four of his first five shot attempts and nearly picked up a double-double with 10 points and nine rebounds in 19 minutes.

“I felt good out there, especially in front of the home crowd. It was either going to be this weekend or tonight when I got back out there and since there were no hiccups, we decided to go with tonight,” Love said.

During the entire second half, both teams battled back and forth, with that late surge by Cleveland constituting their biggest run during those two quarters. James undertook his leadership role when Irving let him know that he likely wouldn’t be returning.

“When Kyrie went out, he told ‘Bron, ‘I think I’m done.’ ‘Bron said, ‘Don’t worry, I got this,'” Lue said. “LeBron was able to attack the basket during that final quarter.”

The opening two quarters saw each team close with a flourish. During the final four minutes of the opening quarter, the Cavaliers put together a 13-2 run to take a 29-20 lead, with the Jazz missing five of their last six shot attempts. Then, Utah scored 10 of the final 12 points of the second period to make it a 44-42 game at the half in favor of Cleveland.

The key issue during that second quarter for the Cavs was their weak outside shooting, hitting just 28 percent of their shots from the field. The chilly touch was especially evident during the final six minutes, when they mustered just four points.

Speaking about the injuries, James indicated that it’s been a season-long process to deal with such adversity:

“It’s mental, it’s challenging. We haven’t been whole all year,” James said. “So we don’t know exactly what we’ve got. But when we step on the court with the guys in uniform, we know what we’ve got and we’ve got to play Cavs basketball. Tonight we did that.”

For the second time this month, the Cavaliers embark on a road trip. This one will encompass four games and begins with a pair of matchups this weekend at the Staples Center in Los Angeles. On Saturday night, the Cavs will face the Clippers in a nationally televised game beginning at 8:30 p.m. ET, followed by a Sunday night clash versus the Lakers that will get underway just after 9:30 p.m. ET.