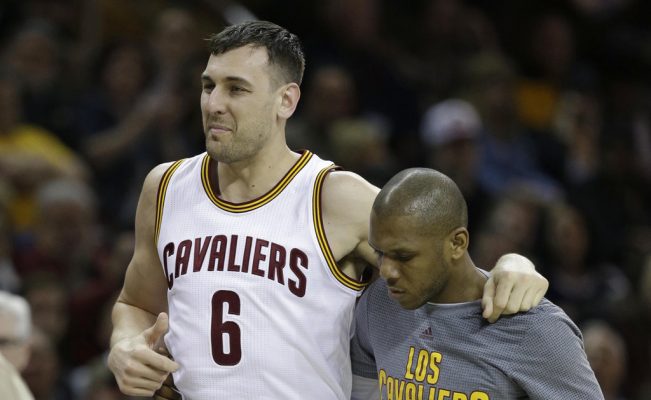 Just one week after signing Andrew Bogut, the Cleveland Cavaliers are expected to release the veteran center in order to free up a roster spot. The team will be seeking to fill that role with an available free agent that will be eligible for the upcoming postseason.

The pending move was expected after Bogut’s brief tenure with the team had ended with a fractured left tibia after one minute of action in Monday night’s loss to the Miami Heat. ESPN’s Dave McMenamin reported that the player replacing Bogut will be signed after the team completes its three-game road trip that begins on Thursday night and ends on Sunday night in Houston.

McMenamin also reported that the Cavaliers could seek to reduce the luxury tax burden of adding another player to the roster:

“The Cavs could waive an additional player — DeAndre Liggins would be the most likely candidate — to mitigate the cost hit it would require to replace Bogut, the source told ESPN. Bogut cost the Cavs nearly $1 million in salary tax and luxury tax fees. Bringing in another player would cost an additional $1 million. If Liggins was waived and another team picked up the defensive specialist before he cleared waivers, the Cavs would receive some cap relief as Liggins’ new team would be on the hook for his salary for the rest of the season.”

Finally, McMenamin also noted that when Cleveland does make its move, the team is expected to simply make an offer to its free-agent selection, rather than go through the process of auditioning players.

Entering Thursday night’s action, the Cavaliers have 20 games remaining in the regular season and are currently 2.5 games ahead of the Boston Celtics for the top record in the Eastern Conference.