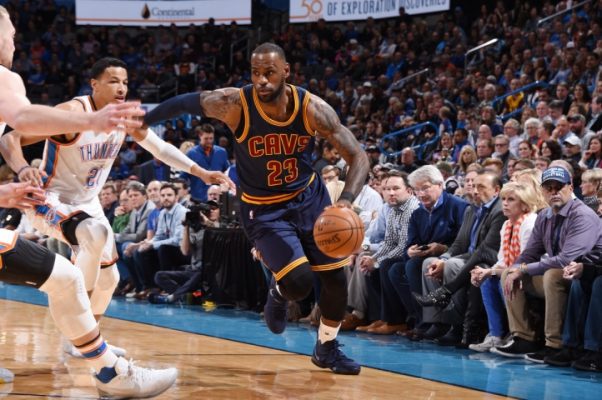 (Oklahoma City, OK) – Ending up on the wrong end of a 12-2 run down the stretch turned out to be costly for the Cleveland Cavaliers as they dropped a 118-109 battle to the Oklahoma City Thunder at Chesapeake Energy Arena on Thursday night.

With 5:46 left in the game, the contest was deadlocked at 99 apiece, but over the next four minutes, Oklahoma City put the game away. The Cavaliers missed four of their five shots from the field and also committed a turnover during that span, while their defense was unable to contain the Thunder.

Being on the tail end of a back-to-back, there was discussion earlier in the day that the trio of LeBron James, Kyrie Irving and Kevin Love would be held out in order to give them some rest. The defeat would have been much worse had that been the case, since the Big 3 accounted for 61 of the Cavs’ points on the night.

Irving had a team-high 28 points and added four assists, while James tossed in 18 points, dished out seven assists and hauled down five rebounds. Love collected yet another double-double with 15 points and 12 boards.

The newest addition to the team, forward Derrick Williams, scored 12 points in 21 minutes of action, hitting all three of his field-goal attempts and connecting on 6-of-8 from the line. The only other Cleveland player to score in double digits was Tristan Thompson, who ended his night with 10 points.

Before the game, Cavs head coach Tyronn Lue had indicated that Williams would see time on the court in order to get a sense of what he may be able to offer:

“We’re going to have him run around and try to get him acclimated to what we’re doing and just see how it works out,” Lue said.

Following the game, James didn’t take any questions from assembled media, preferring to read a statement for 25 seconds before then saying:

“Oh I missed one, Charles Oakley for president,” James said, referencing the former Bulls and Knicks player who had previously indicated his support for James in his feud with Charles Barkley.

The first half saw plenty of twists and turns as back-and-forth play for the first nine minutes of the game saw the Cavaliers hold a slim 21-19 advantage. That was before the Thunder surged in the final three minutes to score the final 10 points and take an eight-point lead by the time the first quarter had ended.

Oklahoma City then used the first three minutes of the second quarter to increase the margin to 12 at 41-29, with Cleveland in danger of letting the game get away from them. However, the Cavs managed to run off 12 unanswered points to knot the score, with both teams then battling over the final half of the second quarter.

The Thunder had held a 53-48 lead with 2:50 left before intermission, but this time it was the Cavaliers that closed the quarter with a run, scoring nine of the final 11 points for a 57-55 halftime advantage.

Oklahoma City held the edge for most of the third quarter, though never enough to take control. Their best chance to blow the game open came when they outscored Cleveland 8-2 in roughly a 90-second span to take a 79-71 lead. The Cavs managed to regain their footing to chip their deficit down to four by the time the horn had sounded to the end the quarter.

The Cavaliers now return home for a Saturday night home matchup against the Denver Nuggets, the only team they’ve yet to face this season. Tipoff will be just after 7:30 p.m. ET at Quicken Loans Arena.