Report: LeBron James ‘Pushing’ Cavs to Trade for Carmelo Anthony at Any Cost 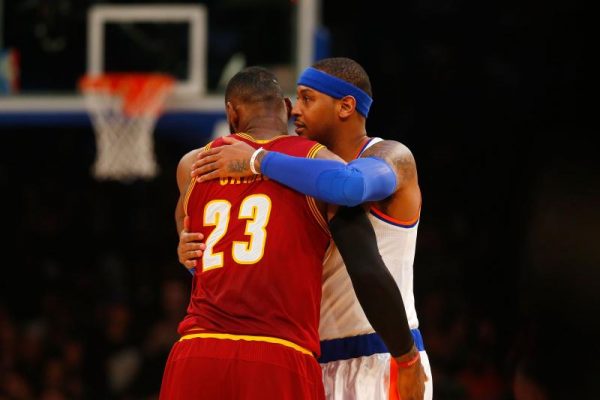 **UPDATE: LeBron James directly addresses the rumors about him “pushing” the Cleveland Cavaliers to trade for Carmelo Anthony.

Two of the biggest storylines of the NBA season have been the New York Knicks’ quest to trade Carmelo Anthony, and the Cleveland Cavaliers‘ quest to address LeBron James’ concerns of needing an additional playmaker.

According to Frank Isola of the New York Daily News, the tides in the trade are beginning to turn, with the Cavs’ biggest star reportedly pushing the organization to trade for Anthony at any cost:

“According to a league source, LeBron is the one pushing the Cleveland Cavaliers front office to acquire Carmelo even if it means trading Kevin Love, which is something Cavs management is opposed to doing. (Phil) Jackson is hoping to move Anthony prior to the Feb. 23 trading deadline and one player the Knicks have targeted is Love, who had 23 points with 16 rebounds in Cleveland’s win over the Knicks last Saturday.

“Any deal for Anthony would require the Knicks’ leading scorer to waive his no-trade clause and the consensus is that Anthony would agree to play for the defending champs and his long-time friend LeBron.”

In previous reports, it had seemed that there was no hesitation from Cleveland to reject any deal involving their prized power forward. While James clearly wanted his longtime friend on the roster, he also seemed uninterested in moving Love. So it’s surprising to see this recent report coming out of James looking to acquire Anthony at all costs.

Love is having an outstanding season for the Cavs, putting up 19.9 points, 1.9 assists and 11.1 rebounds per game while shooting 43 percent from the field and 38 percent from three.

Anthony is putting up comparable offensive numbers, averaging 22.9 points and 2.9 assists while shooting 43 percent from the field and 36 percent from deep. However, rebounding is where the Knicks star falls behind, averaging only 6.1 rebounds per game.

Apparently, James’ plan to get Anthony to Cleveland has been long in the making according to Isola:

“The Daily News reported last February that James and Anthony discussed forcing a trade to Cleveland, but Anthony said he wasn’t ready to leave New York and thus did not ask the team to pursue a possible trade. With the Knicks at 22-30 entering Monday’s game against the Lakers and in jeopardy of missing the playoffs for a fourth straight season, Anthony knows his championship window is closing fast.”