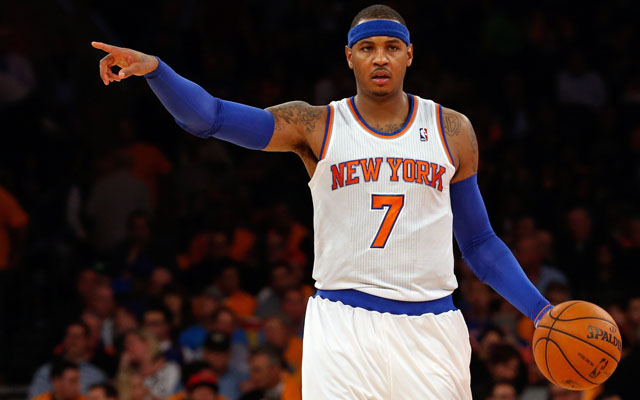 New York Knicks star Carmelo Anthony has been at the center of trade rumors for weeks now, but any trade talk has been stifled by one thing: Anthony’s no-trade clause.

The nine-time All-Star would have to approve any trade before the Knicks could go through with one, and most sources have suggested he would only be willing to go to the Los Angeles Clippers or the Cleveland Cavaliers. Now, we are finding out the Knicks’ considerably high asking price for sending Anthony to the Cavs:

Carmelo Anthony would reportedly waive no-trade clause for #Clippers or #Cavs, but neither would give #Knicks what they want (Griffin, Love)

The Knicks are reportedly asking for Cavs big man Kevin Love in exchange for their longtime star player, and Cleveland is reportedly not interested.

It would be a bold move from the defending champions to move Love, especially with him having a career season with the Cavs. For the year, he’s putting up 20.7 points and 10.8 rebounds in only 31.6 minutes per game.

Anthony is putting up similar numbers offensively with slightly more playing time, scoring 22.3 points per game while averaging 33.3 minutes. However, he doesn’t quite rebound like the Cavs big man, with only 6.0 per game and many suggest that Anthony’s ball-stopping tendencies won’t work in Cleveland’s free-flowing offense.