Several Warriors Players Reveal the One Cavs Player They Actually Like 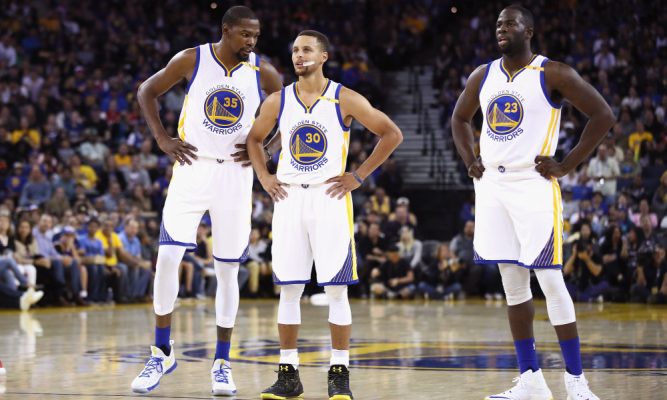 The emergence of the current rivalry between the Cleveland Cavaliers and the Golden State Warriors first surfaced three years ago, with the two teams having faced each other in the past two NBA Finals.

That elevated level of competition has brought with it some heated moments on both sides, with pointed remarks indicating a growing disdain between the teams. However, one Cavalier who appears to not be on any grudge lists when it comes to the Warriors is point guard Kyrie Irving.

Interesting note I forgot to mention. Several Dubs players seem to like Kyrie. Whatever bitterness is in this rivalry doesn't extend to him

Prior to Cleveland’s loss on Monday night, Irving had been the player that likely most haunted Golden State. That’s because in their two previous meetings, it was a clutch Irving basket that had sent them to defeat.

The first instance was the most stinging to the Warriors, with Irving’s 3-pointer with 52 seconds left in Game 7 of the finals accounting for the winning basket. In the latter case, his basket in the closing seconds of their Christmas Day matchup was also a game-winner.

The most disliked Cavs player when it comes to the Warriors might be open to debate, though most likely, the selection would be LeBron James. During last year’s finals, James and Golden State’s Draymond Green engaged in a heated confrontation during Game 4, which resulted in Green’s suspension. That one-game ban caused the Warriors’ Klay Thompson to ridicule James, who ended up getting the last laugh by leading the Cavaliers to their first-ever title.

During Monday’s game, James was the recipient of a brutal shot from Green, though James dismissed talk of any lingering feeling of intimidation by recalling his high school days as a football player.

The rivalry figures to simmer in the months ahead since the only way the two teams will face each other again this season is by again reaching the NBA Finals. If both teams accomplish that feat, it will mark the first time in league history that the same two teams have played in three consecutive finals.