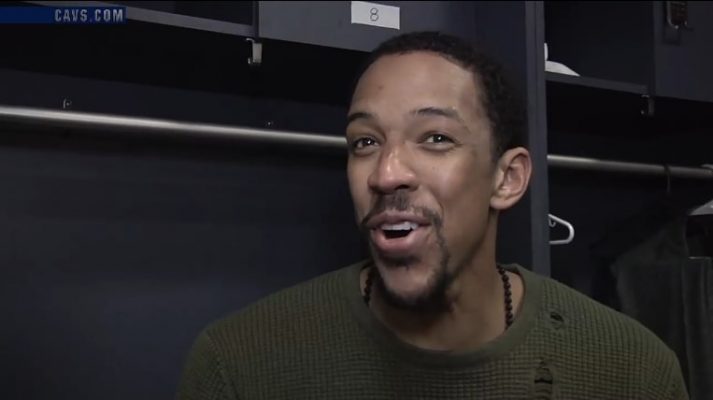 Whenever a team makes a big trade, it is undeniably exciting for fans. But as exhilarating as it can be for the fans who watch the game, it can sometimes be extremely worrying for the players who play the game.

Bringing in new talent means changes to locker-room dynamics, shot distribution, and rotations. For the Cleveland Cavaliers, bringing in a player like Kyle Korver means less opportunities for spot-up shooters like Channing Frye.

But based on Frye’s reaction to the Cavs’ splashy trade, he doesn’t seem too worried about it. Instead of worrying about the changes to an already successful Cavs team, Frye expressed excitement about the matchup problems he and Korver are going to cause together:

“‘Sheeeeit,” Frye exclaimed when asked about his reaction to the trade. “For me, I was ecstatic ’cause now it’s like, OK, who are you going to stunt to? We have guys that go downhill. We have three or four guys that really go downhill, so there will be no more double-teams. I mean, that paint is going to be wide open.”

The 6’11” center said it took him about a month to get used to all the open looks he was getting from playing on a James-led team, and then added:

“Hopefully [Korver] doesn’t get jelly of how wet my jumper is.”

Any way you look at it, Korver has been a historically great shooter. He has shot 40 percent or better from behind the arc every season this decade. He once held the record for most consecutive games with a three before it was broken by Golden State Warriors guard Stephen Curry, and he still holds the record for the highest three-point percentage in a single season (53.6 percent in 2009-10).

After having a career year in 2014-15, resulting in his first All-Star appearance, Korver has seen a notable downturn in production over the last two seasons. But his role in Atlanta was much different than the one he will be filling in Cleveland.

With the Hawks, Korver was a huge generator of offense, through both the shots he took, and the attention that he drew, opening up shots for others. In Cleveland, Korver won’t be drawing attention away from shooters like Frye, Kyrie Irving, or Kevin Love. And as a result, a truly historic shooter like Korver will thrive when acting as the third or fourth option on the floor.

Frye knows all this. But as good as Korver’s reputation as a shooter is, Frye says you can’t really know how good Korver is until you guard him yourself:

“Nobody understands it until they have to guard him,” Frye said. “I think they’re like, oh, he’s just a shooter. But he does so much more than that. I think he allows everyone to be more simple with his energy and with his movement. I think the biggest thing that’s crazy is, like, I’ve been a game where he might have gone 0-for-4 and then 6-for-9 in the next quarter. There’s no, ‘Oh, I’m missing a couple of shots’ mentality. It’s like, I’m just going to make the next 10. And that’s what we needed on this team. Even if you miss two or three, shoot the next 15. You have to be ruthless out there.”

Cleveland’s backup center is clearly excited to be playing with a shooter of Korver’s caliber, as he should be. The Cavs will now be able to surround LeBron James with four of the league’s best shooters in Frye, Korver, Irving, and Love.

It will be an absolutely devastating lineup offensively, with enough size to hopefully compete defensively. While Korver will certainly be taking some of Frye’s shots, he is likely to help Frye get some easier ones as well just by being on the floor.