On the Cusp of Turning 32, LeBron James Compares His Game to Michael Jordan’s 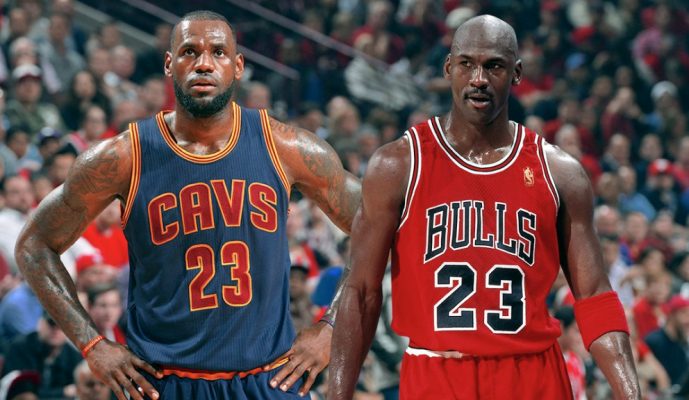 Even before LeBron James began his NBA career with the Cleveland Cavaliers, he was being compared to the legendary Michael Jordan. Now in his 14th season in the league, James’ ability to adapt to the ravages of time still have him at the top of his game, yet he isn’t concerned with how Jordan was also able to do the same at age 32.

James was asked after Thursday’s shootaround if he’s patterned changes in his game to what Jordan did during his time in the league.

“No, I haven’t, because our games are so different. He was much more of a scorer. And at that point, did a lot of post work at that point in time,” James said. “But our games are just different. His body is different. My body is different than his. So it’s just, you recognize the dominance that someone had at that age. At that age, you recognize the dominance. But there’s no similarities in our game at all.”

Jordan’s career ended the season before James began his career. During a tenure that spanned from 1984-2003, Jordan took off most of five seasons because of two retirements.

The two players are similar with respect to their numbers (No. 23) and the devastating effectiveness of their turnaround fadeaway jumpers, yet James sees no comparison.

“No, it’s different,” James said. “He had much more lift in his fadeaway than mine. That was definitely a go-to move of his, but nah, our games are completely different.”

The season that Jordan turned 32, he was returning from more than a year of trying professional baseball. His Chicago Bulls team came up short that season before then winning three more NBA titles in the next three seasons.

Both James and Jordan have won three championship rings by age 32, with James in position to move ahead of Jordan’s pace should the Cavaliers again win the NBA title in June. In addition, given the dedication James has to remaining in top shape, he has the opportunity to match or better Jordan’s six titles by the time his career ends.