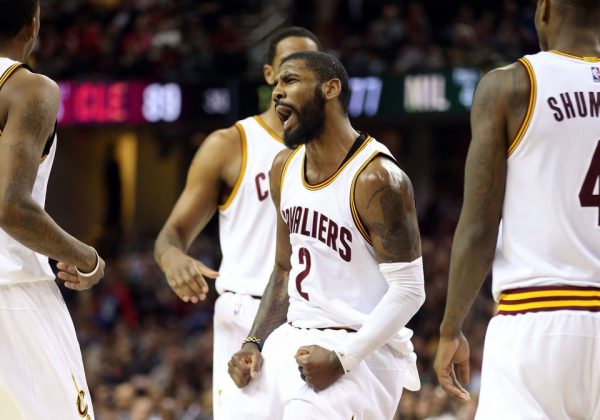 (Cleveland, OH) – A 20-8 run over the final five minutes of the third quarter that was forged through the scoring efforts of Kyrie Irving and LeBron James sparked the Cleveland Cavaliers to a 113-102 victory over the Milwaukee Bucks at Quicken Loans Arena on Wednesday night.

Cleveland held just a 72-69 lead with five minutes to play in the third; however, over the remainder of the period, Irving and James each scored seven points to fuel the run. That gave the Cavaliers a 92-77 lead as the quarter ended.

The push continued when the Cavs scored 10 of the first 14 points of the final quarter to make it 102-81. The Bucks never got closer than 13 points the rest of the way, allowing the Cavaliers to pick up their eighth win in the last nine games and improve their season record to 21-6.

“Tonight was a good win, the team wanted to come out and make a point,” Cleveland head coach Tyronn Lue said. “Kyrie had a lot of pop in him tonight. He had a great all-around game.”

The depleted Cavaliers were without Kevin Love, who missed his second straight game with a left knee contusion, and J.R. Smith, who is out for an extended period after suffering a fractured thumb in Tuesday night’s contest against the Bucks that will require surgery.

“We just have to lead the guys in the right direction every night and our game will take care of itself,” James said about the leadership he and Irving offer.

Irving and James combined for 60 points on the night to lead the charge for Cleveland. Both ended up with double-doubles on the night: Irving led all scorers with 31, handing out a career-high 13 assists and also grabbing six rebounds. James tossed in 29 points, grabbing nine rebounds and dishing out six assists.

“When you have guys out, understanding the magnitude of winning every single ball game, everyone picking up the slack, that’s a championship pedigree right there,” Irving said. “We’ve got to continue to set the tone, not only for ourselves, but for the rest of the league.”

Tristan Thompson may have only scored five points, but he was once again a monster on the glass with 15 rebounds. Meanwhile, the Cavs bench supplied 33 points to the scoring effort, led by 10 points each from Channing Frye and Iman Shumpert. Richard Jefferson, starting his second straight game in place of Love, was the only other Cleveland player to reach double figures. He also notched 10 points before being ejected with 3:19 left in the game following an on-court scuffle.

Lue spoke further about Irving’s effort after the game:

“I want him to be aggressive because that opens up opportunities,” Lue said. “Tonight, he was able to drive into the paint and kick it out.”

The Cavaliers have one more game on their schedule before they host the Golden State Warriors on Christmas Day. That comes on Friday night, when they host the Brooklyn Nets in a game that will tip off just after 7:30 p.m, with Love expected to be back in the starting lineup.