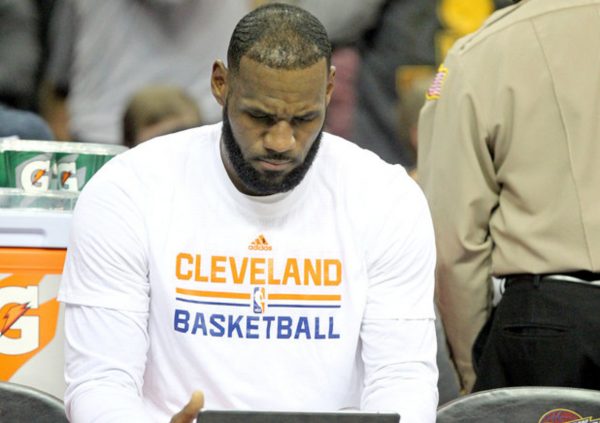 Cleveland Cavaliers forward LeBron James has joked about having a photographic memory when it comes to his ability on the court. Well, it turns out that memory is being enhanced this season, thanks to a new NBA rule that allows for instantaneous uploading of in-game footage to iPads from behind the bench for players and coaches to use.

The new rule is an update to the one instituted prior to the start of the 2012-13 season that allowed for the use of iPads on the bench. James often looks at the footage while he’s resting on the bench.

Joe Vardon of Cleveland.com writes that James is currently the only Cavaliers player taking advantage of the new rule. The footage gets uploaded to an iPad in Cleveland’s video room inside Quicken Loans Arena, before then being rushed out to the bench by a Cavs staffer.

“Just seeing how defenses are playing me, playing us,” James said. “Kind of watching and paying attention to the minutes I was in, so at the last three minutes of the first quarter when I come out, I can watch and see from when I was in. Then I go back in for the second, and I get it once again at the six minute mark of the second quarter. Just trying to stay above the curve and see how I can help.”

James is more than eager to take advantage of the technology, noting the benefits of using it.

“I like to watch the game live, too,” James explained. “So I’m always watching and looking up so I know what’s going on. It’s beneficial. You should, shoot, its 2017. We should be trying to find ways to continue to build our game. Bring technology into it. If guys want the ability to watch film during the game while they’re out, they should do it.”

Cavaliers head coach Tyronn Lue said that he’s currently not using it, citing time constraints during the course of a game.

That doesn’t mean that his staff is completely ignoring the footage. Assistant coach Mike Longabardi has used it to instruct some players during a timeout, though much of that effort has come during the postseason.

Cleveland general manager David Griffin indicated that the team will eventually eliminate the need to rush it from the video room by placing equipment directly behind the bench. However, that’s contingent upon Lue and more of the players embracing the concept.