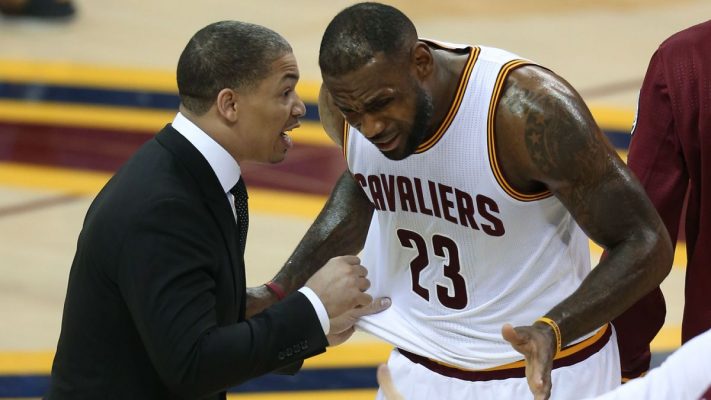 The dramatic events during the second half of Game 7 of last season’s NBA Finals culminated with heroics from the Cleveland Cavaliers’ LeBron James that garnered him Most Valuable Player honors for the third time in his career. One of the reasons for his play during those final two quarters was due to James’ competitive instincts being challenged before and during halftime by his head coach Tyronn Lue.

Sports Illustrated’s article about James, which accompanied his selection as its 2016 Sportsperson of the Year, noted that the conflict began during a timeout with 2:27 left in the second quarter.

With 2 minutes and 27 seconds left in the first half of Game 7 and the Cavaliers trailing the Warriors by three points, Tyronn Lue called timeout. “Bron, you’ve got to be better than this,” the Cavs coach implored.

“What do you mean?” James asked, incredulous. He had just scored 41 points with 16 rebounds in Game 5 and added another 41 with 11 assists in Game 6, evening a series that was essentially over. He’d sent his teammates impassioned late-night group texts, showed them the commencement address Steve Jobs delivered at Stanford and convinced them during a post-practice bus ride across the Bay Bridge that the championship was their destiny. It’s already written, he shouted from the back.

“What more do you want me to do?” he pressed Lue.

“Stop being so passive!” the coach barked. “Stop turning the ball over! And guard Draymond!” James’s numbers looked fine—12 points, seven rebounds, five assists—but he had unleashed a few sloppy passes and Draymond Green, his primary assignment, was 5 for 5 from three-point range. “Bron was mad, pissed off at me, and then we went into the locker room at halftime and I told him the same thing in front of all the guys,” Lue recalls. “He was mad again, pissed off again.”

James complained to assistant coach and former teammate Damon Jones, who didn’t offer much sympathy to his complaints.

“It’s messed up that T Lue is questioning me right now,” James said.

“Everything I read all year is that you want to be coached, want to be held accountable, and trust T Lue,” Jones replied. “Why not trust him now?”

The Cavaliers trailed by seven at the time, with Lue’s tactic being one that he had seen used as a motivation tool from his mentor, Doc Rivers.

“He stormed out of the locker room,” Lue says. “I didn’t really think he was playing that bad. But I used to work for Doc Rivers in Boston, and he told me, ‘I never want to go into a Game 7 when the best player is on the other team.’ We had the best player. We needed him to be his best. I know he might have been tired, but f— that. We had to ride him. And he had to take us home.”

With the game tied at 89 with 1:08 left, Kevin Love recalled how James’ temperament during a timeout with the game on the line flowed through the entire team.

The Cavs had a chance to become the first team in NBA history to come back from a 3-1 deficit in the finals. The team’s general manager, David Griffin, indicated that James’ stature emboldened the team to break new ground.

“When you have LeBron James, you’re never afraid,” Griffin said. “You’re never David against Goliath because you have Goliath. So fear does not really exist. Every circumstance we put ourselves in, we expect to get out of, because we have him. He makes you believe you can do anything because he is present, and we all get to succeed because we’re in his sphere. I imagine that’s how it was with the Yankees and Babe Ruth, but I’ve never seen anything like it.”

Griffin indicated that James’ undying motivation to win stemmed from the disappointment of coming up two games short the year before.

“LeBron tells everyone he’s gotten to the point where you give it your best effort, and if you don’t win, it is what it is,” Griffin says. “I think that’s bulls—. I think he was consumed by that trophy in a way that was probably not healthy, and when he didn’t get it, I don’t think he was the same person for a while. I think it bothered him deeply and he came back a radically better version of himself.”

James’ clinching free throw ensured the Cavaliers first-ever NBA Championship. During the plane flight from Oakland to Las Vegas to celebrate the title, James simply acknowledged the value of Lue’s tactic to him.

“I needed it,” James told Lue.