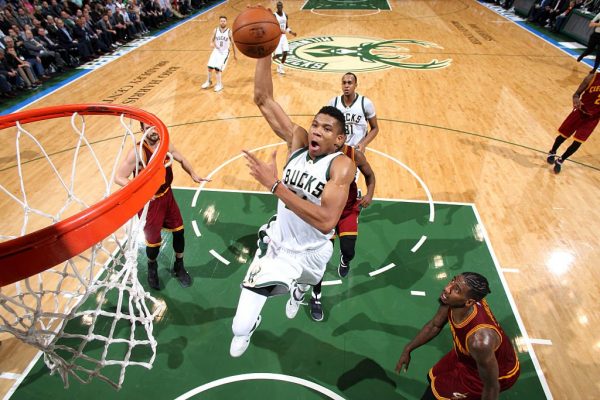 (Milwaukee, WI) – Two cold-shooting stretches for the Cleveland Cavaliers spelled the difference on Tuesday night as the Milwaukee Bucks came away with a 118-101 victory at the Bradley Center to end Cleveland’s four-game winning streak.

The Bucks managed to shoot at a 60 percent rate during the second quarter. On the other end, shooting woes were extended for the Cavs for more than seven minutes of the period. Combined with the end of the first quarter and this stretch, which covered approximately 10 minutes, Cleveland managed to hit just 27 percent of their shot attempts. After once trailing 27-13, Milwaukee ended the half holding a 58-53 lead, managing a 31-11 run along the way.

“We didn’t get stops. They ran off 10 straight points and got into a rhythm and they’re a rhythm team.” LeBron James said. “This wasn’t one of our better games.”

The comeback bid for the Cavaliers stalled following intermission, allowing the Bucks to boost their lead to 18 at 92-74 by the end of the third quarter. The prime culprit was 32 percent outside shooting by the Cavs during the quarter.

“We just let our guard down and let the game get away from us,” Kevin Love said. “We feel like we know what we did wrong, we just have to get better.”

Any chance to stage another fourth-quarter comeback ended when Milwaukee went on an 11-3 run to take their largest lead of the game at 103-81 with 8:28 to play. That soon led to Cleveland head coach Tyronn Lue emptying his bench to close out the game.

Some other key factors that doomed the Cavs’ chances were the multitude of easy inside baskets that the Bucks managed throughout the course of the game. That helped Milwaukee collect 68 points in the paint while dishing out 27 assists, seven of them coming from former Cleveland point guard Matthew Dellavedova. Meanwhile, the Cavaliers turned the ball over 19 times.

“In an 82-game season, you’re going to have one or two of these every year,” James said after the game. “You just have to crumple this up and move on.”

James led Cleveland with 22 points, four assists and four rebounds, while Kyrie Irving scored 20 on the night. Love picked up a quiet double-double with 13 points and 13 rebounds, while J.R. Smith’s 3-point shot again went cold after he hit his first two attempts. For the remainder of the game, he missed his last five shots.

“We didn’t come in ready to play,” Lue succinctly noted during the postgame press conference.

The Cavaliers briefly come home for a big Thursday night contest when they host the Los Angeles Clippers in a game that will tip off just after 8 p.m. ET. One night later, a game in Chicago will be the first of three consecutive road games for Cleveland.