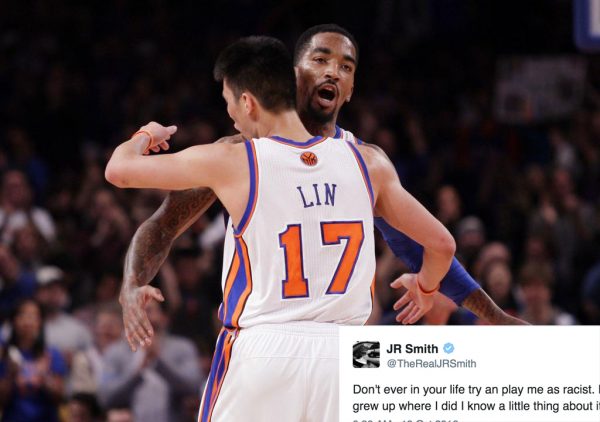 When Cleveland Cavaliers guard J.R. Smith was traded to the team from the New York Knicks in January 2015, he brought with him a reputation within the league. While his time with the Cavaliers has resulted in no trouble, his time with the Knicks was brought up in controversial fashion on a Wednesday radio show based out of New York.

SB Nation’s Nets Daily page wrote about a radio show appearance by Jeremy Lin, who now plays for the Brooklyn Nets. He was a former teammate of Smith’s with the Knicks and spoke on the Boomer & Carton radio show. Lin, who is Asian-American, was asked by co-host Craig Carton about any racial issues involving any of those ex-Knicks teammates.

After Carton had specifically mentioned Smith as a possible instigator, Lin offered a lengthy answer.

“I’ve never spoken to J.R. about it, I’ve never spoken to whoever else you might think about it. So, it’s hard for me because I don’t want to speculate. The one thing I will say is that race has been a huge part of my journey ever since I was a child trying to play basketball,” Lin said. “So, I do think there was always that type of component involved but again as I’ve always said, it’s a double-edged sword. It comes with the good it comes with the bad.

“Yeah, sometimes I’m different … I look different and I’m treated different and that’s a negative thing, and in some ways that’s a really positive thing,” Lin said. “Like, Linsanity wouldn’t have happened if I was white, or black, or whatever. Part of the reason why it was so crazy is because I’m Asian. I think race plays a part into it, always has, and to what degree or how much to who felt what, I can’t specifically answer.”

Not surprisingly, Smith was outraged by the inference that he was a racist. He fired off a trio of tweets in the span of a few minutes that offered his side of the story.

I never want to entertain this topic but whoever said i am or was racist to @JLin7 because he was Asian is wrong on so many levels!

Don't ever in your life try an play me as racist. For someone who grew up where I did I know a little thing about it an it's never ok!

Smith re-signed with the Cavs over the weekend and saw his first action in last night’s preseason loss to the Washington Wizards. He’ll have his first chance to meet up with Lin when the Nets come to Quicken Loans Arena on Dec. 23.