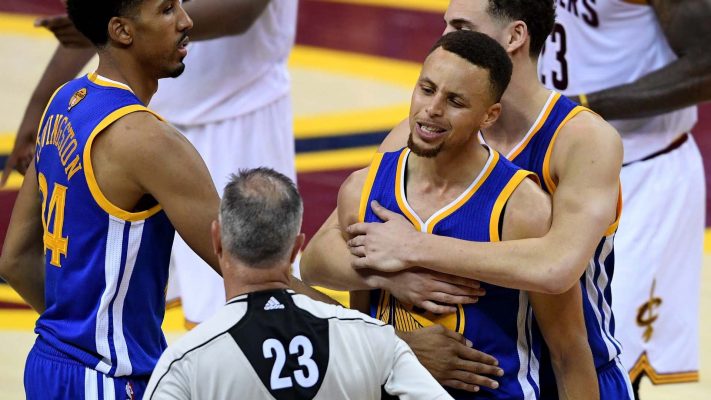 In the aftermath of his ejection in Game 6 of the NBA Finals on Thursday night, Golden State Warriors guard Stephen Curry and his head coach, Steve Kerr, were each assessed $25,000 fines by the NBA office on Friday morning.

With 4:22 left in the game, Curry was whistled for his sixth foul, officially ending his night on the court. However, before he left, he angrily threw his mouthpiece into the crowd, which resulted in his being ejected and sent to the Golden State locker room. The ejection was a first for his career.

In postgame remarks, Kerr made critical comments directed at the game’s officials.

“He had every right to be upset. He’s the MVP of the league. He gets six fouls called on him, three of them were absolutely ridiculous,” Kerr said. “He steals the ball from Kyrie (Irving) clean at one point. LeBron (James) flops on the last one. (Referee) Jason Phillips falls for that. As the MVP of the league, we’re talking about these touch fouls in the NBA Finals.

While upset about the calls, Kerr didn’t use them as an excuse for the loss, which evened the series at three games apiece.

“Let me be clear: We did not lose because of the officiating. They totally outplayed us, and Cleveland deserved to win,” Kerr said. “But those three of the six fouls were incredibly inappropriate calls for anybody, much less the MVP of the league.”

Game 7 will take place on Sunday, with tipoff set for just after 8 p.m. ET.