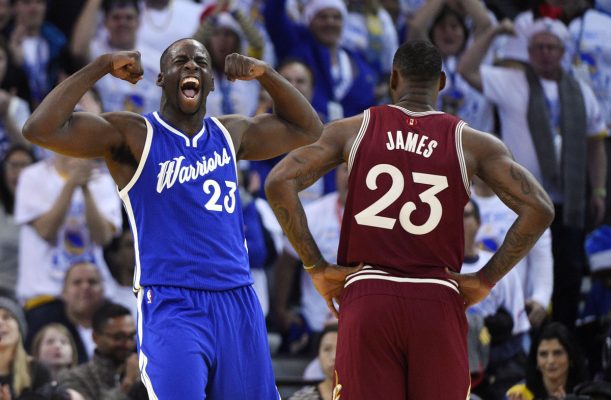 The continued controversial play of Golden State Warriors forward Draymond Green caught the attention of the Cleveland Cavaliers after Green received no penalty on a play during the Warriors’ Game 5 victory over the Oklahoma City Thunder on Thursday night.

With 7:22 left in the game, Green put up a baby hook and inexplicably shifted his right leg up in a kicking motion. In the process, his foot narrowly missed the face of Thunder guard Russell Westbrook and actually did glance across Westbrook’s chin.

Each of the Cavaliers, who saw the footage shown to them by Cleveland.com beat writer Chris Haynes, appeared to be shocked by what they saw. However, only J.R. Smith made any sort of comment about it and that came with an air of resignation.

“(The league’s) not going to do anything, though,” Smith said.

Privately, the team feels that Green is being given special treatment for his actions, which now is number three in this series alone. He had already delivered a pair of separate hits to the groin of Thunder center Steven Adams in Games 2 and 3, respectively.

In the latter case, Green was assessed only a Flagrant 1 foul, which allowed him to stay in the game. The day after the game, the call was changed to a Flagrant 2, a pointless gesture since that kicked him out of a game that had ended the night before. He was also fined $25,000, which also borders on meaningless, considering his salary this season was $14.26 million. Most importantly, he was allowed to play in Game 4, though the Thunder won that game easily

Postgame comments by Warriors head coach Steve Kerr seemed to take offense that there was anything deliberate, with Kerr saying the kick was “inadvertent.”

In contrast, rarely-used Cavalier guard Dahntay Jones was suspended for Game 4 of the team’s series against the Toronto Raptors after he struck Raptors center Bismack Biyombo in the groin in the waning moments of Game 3 last Saturday night.

The reason such a call would be important is because Green is just one flagrant point away from being suspended, something that would also be in order if he receives two more technical fouls. Currently, he’s at five for the postseason.

The Warriors’ season is currently hanging in the balance, trailing Oklahoma City 3-2, with Game 6 set for the Thunder’s home court on Saturday night.