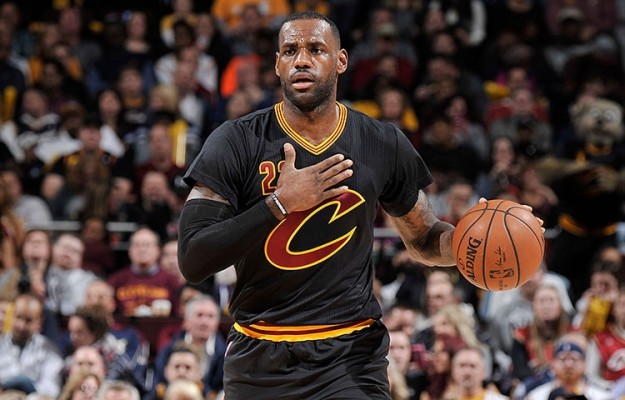 (Cleveland, OH) – Roaring back from an 18-point first half deficit helped the Cleveland Cavaliers put an end to their three-game losing streak as they knocked off the Portland Trail Blazers 105-100 at Quicken Loans Arena on Tuesday night.

LeBron James scored 14 of his team-high 33 points in the fourth quarter, including 10 of the team’s last 16 points. He also collected another double-double, hauling in 10 rebounds and spoke of his all-around effort after the game:

“I had to do a little bit of everything, and I’m OK with that,” James said.

Ironically, James and Kevin Love were virtually non-existent in the first quarter, combining for just four points and two rebounds. However, by the time the game ended, the duo had combined for 51 points, with Love adding four rebounds and four steals.

Love acknowledged how important James’ clutch play was in the final quarter:

“Bron is Bron, and when we needed a big basket, he got it for us,” said Love.

For much of the first half, the Cavs’ woes of the past few games continued to be on display, falling behind by double digits early, eventually finding themselves behind by 18.

The Cavaliers watched Portland put together an early 19-6 run, though a 9-2 Cavs run got them back in the game, with the first quarter ending in an eight-point deficit at 25-17. Both teams showed better ball movement in the second quarter, but Portland was able to keep up its torrid first half shooting, finishing the first 24 minutes by hitting 59 percent from the field. Compounding the problem was the fact that the Trail Blazers held a 20-12 advantage on the boards.

James saw the 14-6 surge that led into halftime as a key factor in waking the team up:

“We did a great job of coming back in the latter part of the first half,” said James.

“We showed a little bit of grit at the end of the first half. It was very important,” said Blatt. “We made a minor run and it got us back in the game, and it sort of set the tone for the second half.”

One key to the comeback was the team’s defense that saw the Cavs collect nine steals from the start of the push, including seven in just the third quarter. For the game, they also forced Portland into 18 turnovers, committing just eight on their own.

In addition, Blatt went to a smaller lineup to start the second half, a decision that paid dividends as Mo Williams finished with 13 points on the night. In addition, Jared Cunningham played 34 minutes and garnered praise from Blatt:

“I thought Jared did a great job, playing defense with intensity and purpose,” said Blatt. “We had to do some things to match up with their backcourt and Jared is a guy who can defend people.”

After the game, Cunningham spoke about his 34 minutes of action and his defensive effort:

“It’s definitely encouraging, but it’s also tiring,” said Cunningham. “If that’s what they need, I think I can be great for that.”

Blatt’s reasoning for the lineup shift was due to the dictates of how the game was going:

“The way Portland plays requires a specific defensive approach,” said Blatt. “We played the lineup we had to play to win the game.”

Love spoke about how the defensive approach changed to start the second half:

“We just came out in that third quarter and hit first. I think we need to exploit mismatches, and sometimes that means mixing up the lineup,” said Love. “

A key stretch in the final minutes saw a five-point swing help hold off the Trail Blazers, who whittled their deficit down to three with 2.9 seconds to go before two free throws from Williams clinched the contest. Portland had a chance to slice the margin to just four at 96-92 with 2:09 left, but two missed free throws were followed by a three-pointer from Matthew Dellavedova, who finished the night with 17 points.

Much of the damage by the Trail Blazers was inflicted by their backcourt, with the duo of Damian Lillard and C.J. McCollum accounting for 57 of Portland’s points. Lillard’s 33 matched James for game-high honors.

The Cavaliers, who improved their season record to 14-7, will be on the road for their next two games, with a Friday night matchup in Orlando first on the docket. That game will tip off just after 7 p.m. ET.