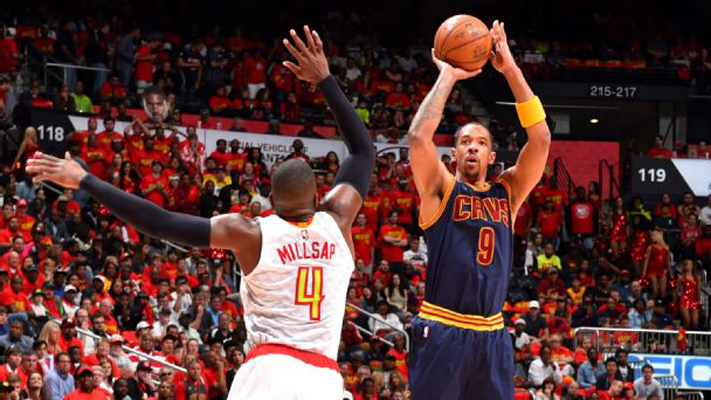 Less than two weeks before his 33rd birthday, Channing Frye turned back the clock and helped turn out the lights on any hopes the Atlanta Hawks had of throwing a scare into the Cleveland Cavaliers.

By going 7-of-9 from three-point range Friday night on his way to a career playoff high of 27 points, Frye became the unlikely star of the Cavs’ come-from-behind 121-108 victory that gave them a commanding 3-0 series lead over the Hawks in the Eastern Conference semifinals.

It’s not as if the veteran forward, who was acquired in February from the Orlando Magic before the NBA’s trade deadline, can’t be as proficient from long distance as J.R. Smith or Kevin Love. Frye demonstrated that six years ago in the first of his four seasons with the Phoenix Suns, when his newfound prowess from beyond the arc helped them reach the Western Conference finals before losing to the Los Angeles Lakers.

But at this time a year ago while the Cavs were marching to the NBA Finals, Frye was recovering from a season to forget with the Magic in which he ranked 387th out of 492 players in efficiency. And after averaging just over 17 minutes in 26 games after coming to Cleveland, there was nothing to suggest he would be anything more than a spot player off the bench in the postseason.

That was until coach Tyronn Lue gambled on playing Frye and Love together at the start of the fourth quarter with the Hawks holding a 91-85 lead. Until that point, the two of them appeared as part of the same unit in just nine games during the regular season and playoffs for a total of only 38 minutes, according to Jason Lloyd of the Akron Beacon Journal:

“We just tried to hold on and keep the game close because we knew in the fourth quarter we were going to be ready to adjust,” Lue said, perhaps hinting at the Frye/Love combination without directly addressing it. “I thought the lineup of Kevin and Channing really gave them problems because it opened up the floor for Kyrie (Irving) and LeBron (James) to get to the basket. And if their bigs helped, Kevin and Channing would be wide open for shots. Channing did a great job of taking the shots and we want him to be aggressive taking the shots and he made them.”

Frye, who will turn 33 on May 17, scored 11 of his points in the final 12 minutes as Lue chose to sit center Tristan Thompson, who had been a beast on the boards but a burden at the free-throw line. The Hawks went so far as to foul Thompson to begin the third quarter before the Cavs could even inbound the ball.

As Frye told Jeff Zillgitt of USA Today after the game:

“I always tell everybody around me I just want to earn my keep here. Whether it’s one game (or) it’s one quarter, I’m going to help us win. Tonight, I just got the opportunity, and I took advantage of it. I’m appreciative that they kept giving me the rock, and they let me go crazy a little bit.”

As a part of the Suns in 2009, Frye knocked down a total of 172 three-pointers, a mark which remains a single-season career high for him. What was especially noteworthy is that he had made a total of only 20 long-range shots before that in two years with New York and two with Portland.

Cavs general manager David Griffin was part of the front office of the Suns when they signed Frye and vouched heavily for the seasoned veteran. The decision to obtain him wasn’t universally embraced at first by fans because it meant parting ways with longtime favorite Anderson Varejao.

But the numbers don’t lie. Frye is 10-of-17 in the playoffs on three-pointers, and he’s part of a second-quarter lineup led by James that ranks second on the team only behind the starting five in terms of analytics.

Plus, he truly enjoys being around a group of players he has known for years, particularly Richard Jefferson.

“Everybody on this team is pros,” Frye said. “I’ve told many people this is probably the best chemistry team I’ve been on in my 10, 11 years. It’s amazing.”

After Friday night, the feeling of admiration is no doubt even more mutual.