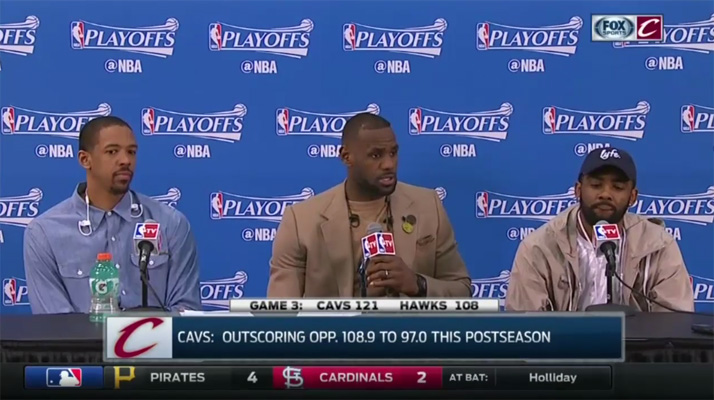 With the Cleveland Cavaliers remaining undefeated after seven playoff games thus far, LeBron James’ confidence about the team continues to grow saying that the Cavaliers are a team that’s “destined for greatness.”

“We’re a team that’s destined for greatness and I really believe that,” James said. “We’ve got a mission, and we have another chapter in our goals on Sunday so we look forward to the challenge.”

James made his remarks after Friday night’s comeback victory over the Atlanta Hawks, which put the Cavs just one victory away from reaching the Eastern Conference semifinals for the second year in a row.

The comments are similar to team owner Dan Gilbert’s remarks to Cleveland.com, in which he noted how Cleveland seems to have a different player stand out each game.

“It’s exciting, but it takes the whole team,” Gilbert said. “You see Channing (Frye) today, J.R. Smith on Wednesday. It’s a special feeling going on right now, just got to keep it going.”

One of the reasons for James and Gilbert’s excitement is that the pieces are in place for a potentially long run, with Kyrie Irving, Kevin Love and Tristan Thompson all signed to long-term deals. While James is technically a free agent after this season, there seems little doubt that he’ll sign a max deal in July, if not sooner.

Another factor in that attitude stemmed from Channing Frye’s game-high 27-point performance on Friday night. That effort helped vindicate general manager David Griffin’s decision to adjust his roster at midseason. Frye had only had a few noteworthy performances prior to that, despite being lauded by Griffin at the time of his arrival.

Should Cleveland complete its sweep on Sunday afternoon, they’ll likely get a full week of rest before taking on either the Miami Heat or Toronto Raptors.