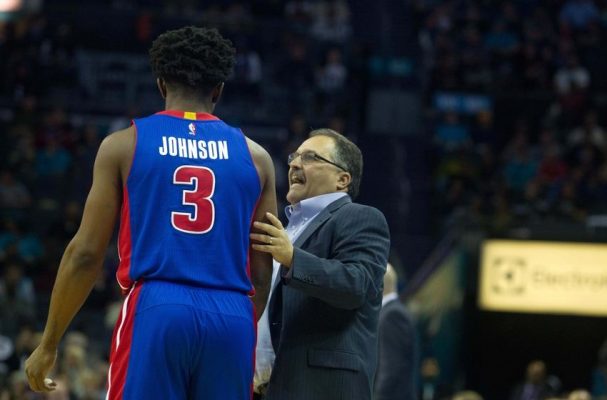 With the Cleveland Cavaliers holding a 2-0 lead over the Detroit Pistons in the first round of the NBA Playoffs, the stream of comments from Pistons rookie forward Stanley Johnson that were directed at LeBron James appears to have ended.

Detroit head coach Stan Van Gundy told reporters on Thursday that while Johnson hasn’t been intimidated by the prospect of guarding James, his willingness to offer inflammatory comments could be detrimental to any hopes of a Pistons comeback.

“I had a talk with Stan today, and so I’ll leave it at that,” Van Gundy said. “I told him what I thought about his comments and everything. That’s a discussion that we had today.”

Chalking up the comments to Johnson’s youth, Van Gundy was concerned enough to initiate the conversation after seeing the remarks after Wednesday night’s loss in which Johnson stated that he was “in the head” of the 13-year veteran.

“Well, look, you do (cringe) a little bit,” Van Gundy continued. “But you also, you have to realize he’s a 19-year-old kid going through this for the first time. You get him right after a game like that, and he’s frustrated and all of that. We met. We talked. He knows how I feel, what my concerns are, but it wasn’t a — at least I hope he didn’t take — it wasn’t an anger session. It wasn’t a ‘You’re an a–h—‘ type of thing. It wasn’t. It’s just another learning experience for a 19-year-old kid.”

There won’t be any attempt to punish Johnson according to Van Gundy:

“I’m not fining him or doing anything like that,” he remarked. “They are grown men, and they talk to the media and the whole thing. But I wanted to let him know what my concerns were, and so we talked about it. I thought it was good, and I thought that he understood and received it well.”

Between the first two games, Johnson had commented that James was being given preferential treatment by referees. Those comments were also endorsed by Van Gundy, which earned the coach a $25,000 fine from the NBA

Despite some conjecture that Pistons veterans could have told Johnson to tone down his remarks, Van Gundy didn’t feel like that would have made much difference:

“Nah,” Van Gundy said. “They would have probably told him the same thing I did.”

Van Gundy dismissed any talk of James using the provocative comments as fuel for Friday night’s Game 3, saying that such concerns would only conflict with James’ ultimate goal.

“Look, LeBron understands that it’s about the game. I don’t think a guy like him needs much more motivation,” Van Gundy said. “They’re talking about trying to win a championship. That’s a lot more motivating than something a rookie might have said.”