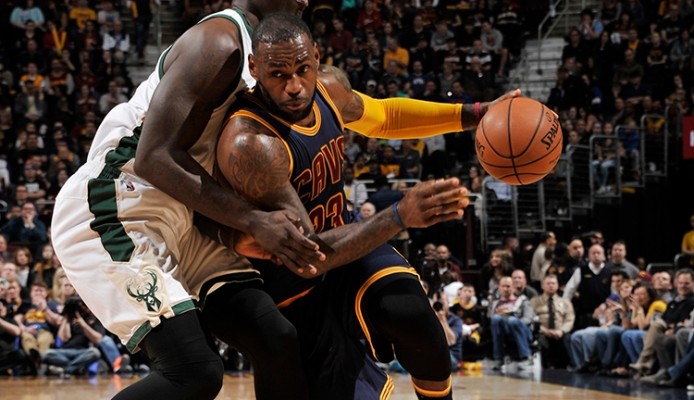 (Cleveland, OH) – Using strong fourth-quarter defense to hold the Milwaukee Bucks to just 17 points in the period, the Cleveland Cavaliers won their 10th game in the last 13 tries with a 113-104 victory on Wednesday night at Quicken Loans Arena.

Entering the final quarter, the Cavs held a slim four-point advantage, and after the Cleveland defense held Milwaukee scoreless over the first four minutes of the fourth quarter, they held a 97-87 lead. However, the Bucks would get within six on four occasions, the last time at 108-102 with 1:17 left, but after a Cleveland miss and a Bucks turnover, J.R. Smith’s three-pointer with 20.2 seconds remaining clinched the contest.

Six different players scored in double figures for the Cavaliers, including all five starters. LeBron James finished with 26 and Kevin Love finished with 24 points for Cleveland, with Love adding 10 rebounds for a double-double. James was equally active by adding eight assists and six rebounds.

Kyrie Irving came close to a triple-double with 14 points, eight rebounds and eight assists. Joining him were Smith and Tristan Thompson with 13 each and Timofey Mozgov adding 10. Thompson’s 10 boards on the evening also allowed him to pick up another double-double.

“Guys were shooting their shots, making the extra pass, playing downhill,” Love said. “When we do that, we’re a better team.”

As a team, the Cavaliers had excellent ball movement, handing out 29 assists on 40 field goals and getting to the foul line 27 times, connecting on 23 of those attempts.

“When the ball has that energy, that’s the result sometimes,” James said. “But you have to make the basket.”

Cavs head coach Tyronn Lue was happy with the assists on the night, which now totals 67 in the last two games:

“I thought we moved the ball well,” Lue said. “When we do that, we’re tough to beat. I think everyone’s energy picks up when they’re touching the ball because they feel that they’re a part of the offense.”

At the outset, the Cavaliers were able use a combination of 59 percent field-goal shooting and a 13-4 advantage on the boards in the first quarter to hold a 35-25 lead. However, sloppy play and a cold spell midway through the second period tightened things up, with Cleveland heading to intermission holding a 63-61 lead.

That sloppy play was reflected by the six turnovers on the part of the Cavs, while the frigid shooting saw them connect on just 1-of-9 field goal attempts during one stretch. The latter struggle allowed the Bucks to go on a 14-4 run that chopped an 11-point Cavaliers lead down to one at 50-49.

James spoke about how the Cavaliers’ defense cracked down after allowing those 61 first-half points:

“Coach (Lue) got on us at the half,” James explained. “He told us to be more physical.”

The third quarter saw each team go on runs, with the Cavs missing a golden opportunity to take control of the contest. They used a 25-13 run to hold a 90-80 advantage with just over two minutes left in the period, but Milwaukee tallied seven of the final eight points to make it a four-point contest with one quarter remaining.

Love spoke about what the difference in the game was for Cleveland:

“I think we just pushed through it,” Love said. “They went on their runs, but we were able to sustain ourselves for 48 minutes.”

The Cavaliers head to New York for games on Thursday and Saturday night. The Thursday matchup will have them meeting the Brooklyn Nets in a game set to tip off just after 7:30 ET. On Saturday, they’ll move to Madison Square Garden to take on the New York Knicks at the same time.