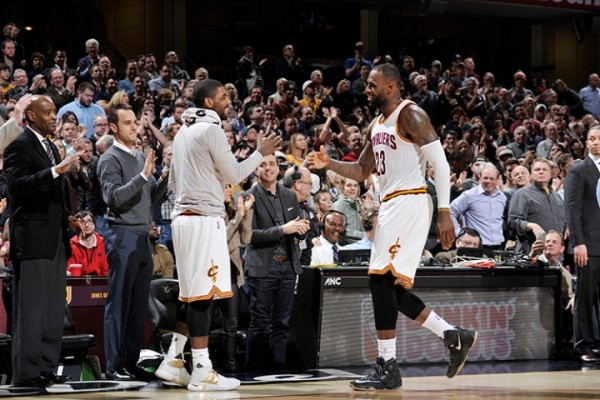 (Cleveland, OH) – LeBron James collected his 41st career triple-double as the Cleveland Cavaliers dished out a season-high 38 assists on the night to defeat the Denver Nuggets, 124-91, at Quicken Loans Arena on Monday night.

“We got back to the basics, stuck to the game plan and got it done,” explained James after the game.

The victory improves Cleveland’s record to 50-20 on the year and marks the ninth time in team history that they’ve reached the 50-win milestone mark, including six times during James’ career.

James ended the night with a game-high 33 points, 11 rebounds and 11 assists for his second triple-double of the 2015-16 campaign. He was also one of four players to score in double figures. J.R. Smith collected 15 points, five assists and four rebounds, while Channing Frye got the start in place of the ailing Kevin Love and scored 14 points. Matthew Dellavedova rounded out the quartet with 10 points and seven assists.

“I liked his pace because it opened the game up for us,” Lue said. “He’s got to keep doing that, even when things get tough.”

Despite going through another roller-coaster performance in the first half, the Cavs were able to shake off the misery of their performance on Saturday night.

The Cavaliers jumped out to a 19-point first-quarter lead, courtesy of an 18-2 run and held a 38-23 lead at the end of the period. The combination of 61 percent field-goal shooting and a 15-5 advantage on the boards were the key reasons for that comfortable margin.

However, the Nuggets answered with a 20-3 run of their own over the first seven minutes of the second quarter to take their second and last lead at 43-41. The Cavs struggled with nine consecutive misses on their field-goal attempts, three turnovers and James resting on the bench. He was inserted back in the lineup soon after and the Cavaliers were able to use the final five minutes to get back on track with a 15-5 run and a 56-48 halftime lead.

Lue spoke about what mistakes were made during the second quarter:

“I thought we lost our pace, turned the ball over too much and committed some dumb fouls,” Lue said.

Solid ball movement in the third quarter helped Cleveland again take control of the game as they handed out 10 assists and used a 13-2 surge to again boost the lead to 19 at 80-61. Denver was able to chip four points off the margin by the time the period ended, with the Cavaliers leading 87-72. In the fourth quarter, Cleveland simply poured it on even during garbage time, leading by as many as 36.

Frye was asked about how the Cavaliers were able to negate the Nuggets’ big lineup to start the second half:

“We’ve got to play our game, no matter who’s out there,” Frye said. “Every basketball contest is a chess game.”

Lue was then asked about the team’s up and downs and how the Cavs can avoid them in the future:

“We definitely have to develop that killer instinct and the guys have to realize that we’re getting to a tough stretch,” Lue said.

The Cavaliers return to action at home against the Milwaukee Bucks on Wednesday night. That game is set to tip off just after 7 p.m. ET.