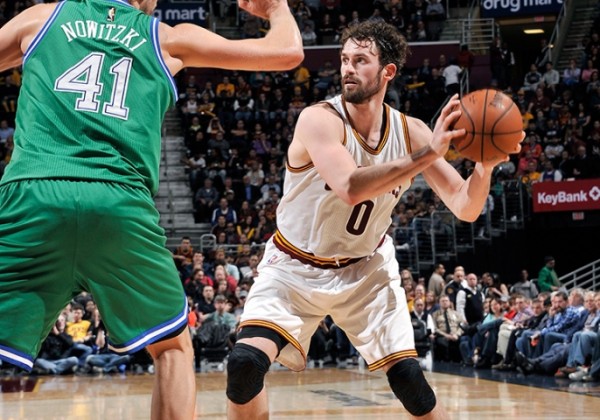 (Cleveland, OH) – A Kyrie Irving steal with 2.9 seconds left helped the Cleveland Cavaliers hold off a furious fourth-quarter rally by the Dallas Mavericks and collect a 99-98 victory at Quicken Loans Arena on Wednesday night.

In the final period, the Cavs led Dallas 89-71 with 9:31 left before the Mavericks went on a 22-6 run to get them within two points with 2:59 to go in the contest. Dallas then had a chance to either tie the game or take the lead on four different occasions, the last time coming in the closing seconds.

Irving had actually thrown the ball away with 16.6 seconds to go, but his steal resulted in an immediate foul by Dirk Nowitzki. Irving then converted his two free throws to make it 99-95, which proved to be important since Dallas connected on a three-pointer at the buzzer.

Irving was asked after the game about how he was able to keep the error from lingering in his mind and make the steal:

“You just have to have a next-play mentality,” Irving said. “You have to block it out.”

Cleveland resorted to small ball for the game, with Iman Shumpert starting in place of a resting LeBron James, and held the lead from start to finish. However, the game saw a series of twists and turns that eventually turned what looked like a comfortable win into a nail-biter.

Cavaliers head coach Tyronn Lue declined to say the team was lucky to emerge with a win:

“I’m thankful for the win. I don’t feel lucky, we were up 20 twice. They came back and made a game of it,” Lue said. “For the most part, guys competed, were able to keep fighting and we were able to win the game.”

Irving led all scorers with 33 points and grabbed five rebounds, while Kevin Love collected a double-double by halftime and finished with 23 points and 18 rebounds.

“We just played hard, they had their runs, we had ours,” Love said. “We were able to sustain, though at the end it was a little scary.”

Two other Cavs finished in double figures, with Channing Frye finishing with 14 points that included a trio of three-pointers, and J.R. Smith closing his night out with 13 points.

James sat out the game as part of Lue’s plan to give his players some rest during the team’s five-games-in-seven-nights stretch. Prior to tonight’s game, the Cavs had dropped both games this season in which James sat out and had a 3-12 record when he didn’t play since his return in 2014.

Love and Irving were asked about playing without James and had different responses:

“More than anything, it’s huge for us to get a win when we can rest ‘Bron like that,” Love said. “It’s great for us, it’s definitely a learning curve for us because we haven’t had much success when he sits because he brings so much to the table.”

“I don’t want to dig too deep into it because at a certain point, he’s on our team,” Irving said. “It’s not like we don’t want him on the team or what the record speaks for when he’s not there.”

The Cavaliers return to action on Friday night when they play the first of back-to-back games in the Sunshine State, facing the Orlando Magic in a contest set to begin just after 7:00 p.m. ET.